Does this video show a water droplet in gravitational orbit?

Andrew Rader, an author and engineeer, tweeted a GIF video showing a droplet of water rotating around some sort of probe. 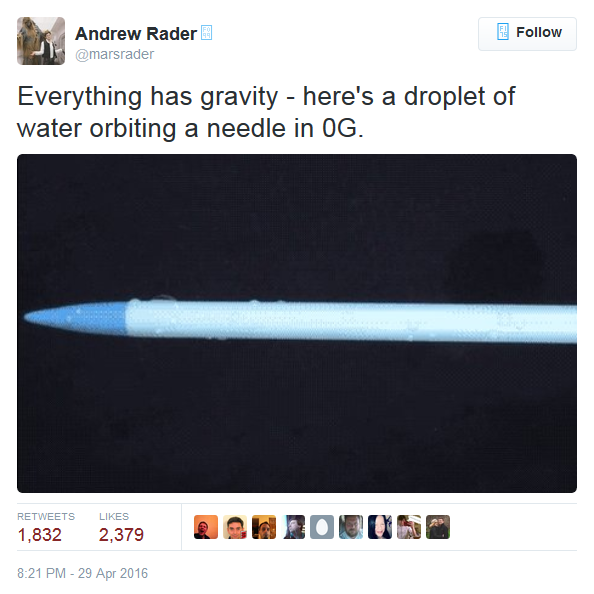 Everything has gravity - here's a droplet of water orbiting a needle in 0G.

No source is provided. The scale is unclear. The result is counter-intuitive, and I am skeptical.

I realize that there is a stitching point somewhere to make the GIF repeat. I'm not challenging that aspect.

Does this video show a water droplet in (gravitational) orbit around a needle?

The GIF was sourced from the International Space Station video by astronaut Don Pettit. The video depicts small water droplets orbiting a polyethylene knitting needle which was charged by rubbing it with a piece of paper. Don Petitt states that the blue knitting needles are "8mm in diameter".

In the video, Don Pettit clearly says that the attractions are electrostatic, and not gravitational in nature.

A transcript of the relevant section for those who can't watch the video (starting around 0:50, emphasis mine)

This is like a little satellite going around a cylindrical shaped planet , except the physics here is a little different, it's not about gravitation, it's about charge forces, and of course charges can exert a potential field as we call it, so it can exert a force at a distance with no tangible connection.

232
Does hot water freeze faster than cold water?
6
Is this magnetically-controlled balls video fake?
10
Is this “quantum levitation” video real?
13
Is this video from NASA proof that LENR is a real effect?
31
Does the Gravitational constant fluctuate?
5
Is this CCTV video about a chair moving by itself in Essex theatre fake?
3
Water swirl according to hemisphere: video
3
Was this video of a home made phone charger faked?
11
Does cold water boil faster than hot water?