Will Europe soon have more Muslims than Christians?

This story, which appeared in the UK tabloid The Sun (and widely repeated elsewhere), has also been doing the rounds on social media.

The original story has the strapline:

Muslims will soon outnumber Christians in Europe, a Belgian government minister has claimed.

The remark was made by Koen Geens at a meeting investigating the terrorist attacks in Brussels.

The headline was repeated widely (e.g. Breitbart), and text of the article includes a more nuanced claim:

Is either version of the claim true? Will there soon be more Muslims than Christians in Europe (even if we just count the practising)?

According to the Pew Research Center, which seems to be the main group analyzing the demographics here, Europe is projected to retain its Christian majority, but religious minorities will grow.

Even accounting for the increase in immigration since this post was written in April 2015, Christianity should apparently be about 50-65% of the population in 2050. This also accounts for a presumed growth of atheism and generational population change. Of course, this is quite different from the almost monoreligious culture that Europeans have taken for granted up until recently, but the claim that Christians will soon be a "minority" doesn't strictly match demographic trends.

If we remove the word "practicing" from Mr. Geens' claim, it doesn't seem very likely under common sense assumptions about demographics.

I will have to do a bit of original research here, since I was unable to find any media reports on this.

In 2004, Gallup reported that church attendance was at 3-5% in Denmark, Sweden, and Finland, and similarly low in France and Germany. This was not based on their own poll, but on an EU initiative called the European Social Survey. 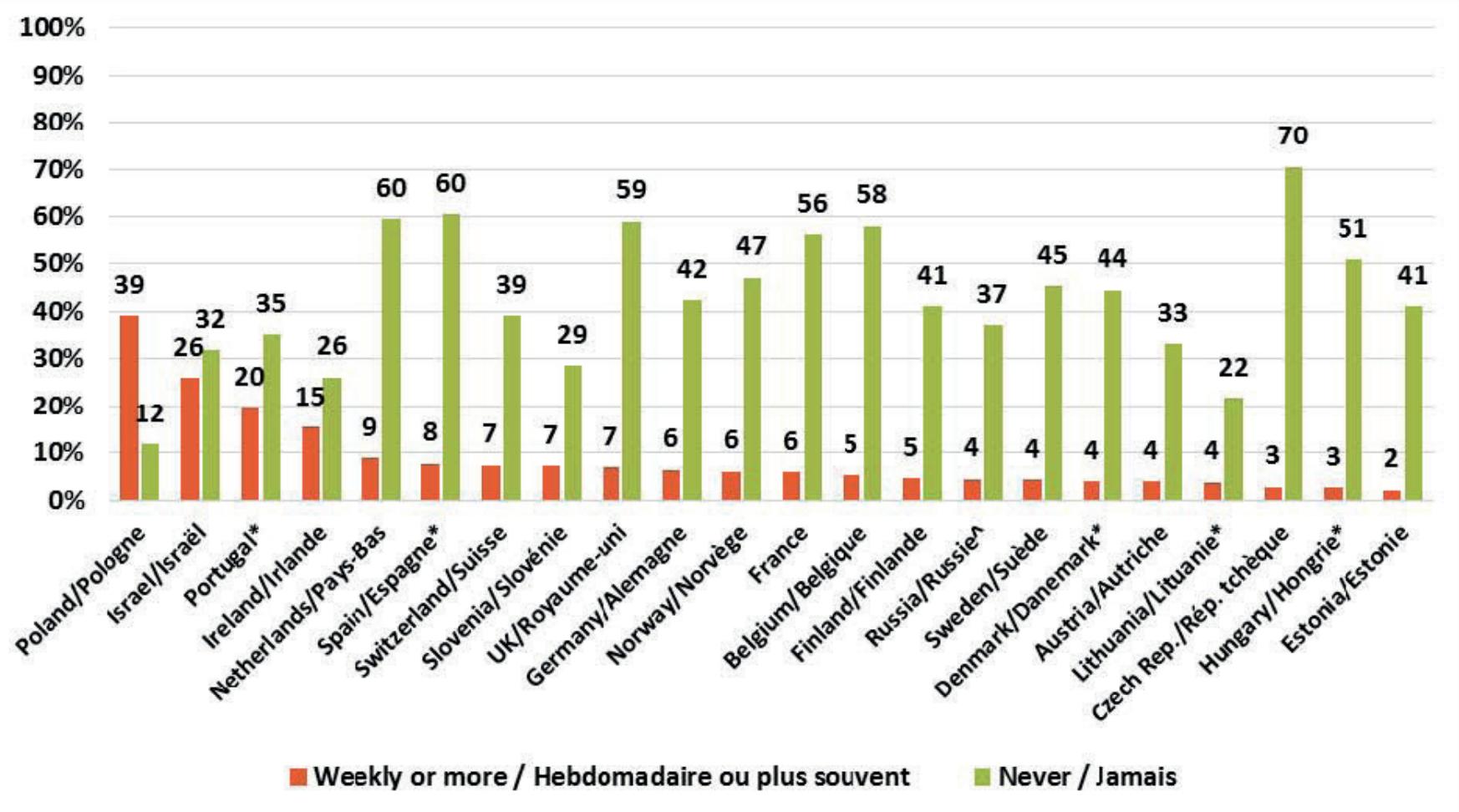 Do these figures include Muslims? Basically, no. In fact it is very hard to measure Muslims by the survey criteria. Jaak Billiet and Bart Meuleman explain in their 2008 study "Religious diversity in Europe and its relation to social attitudes and value orientations":

During the equivalence tests, we have found that the set of items that we have developed for the ESS core is not really suitable for non-Christian religions such as Islam. One of the reasons for this was exposed: the indicator of participation in public religious service does not function for Muslim women. In view of future research in Europe, an alternative indicator must be found.

In plain language, Muslim women don't go to mosque, so "attendance" is not a proper measure of their religiosity. Hence the EU had to start a separate survey called EURISLAM (dead link) to employ some "alternative indicators". However, the authors of this survey were hesitant to report their results publicly, as they explain in a paywalled article:

calculating relative religiosity seems to be risky when the significance of frequency of prayer is inherently difficult to compare between Muslims for which the prayer is only one of the five fundamental religious obligations and, for instance, Christians.

Since that article gave precisely no information whatsoever about what results they found for the religiosity question, I looked to the full presentation of results, only to find:

We refrain from presenting these here to keep the number of tables and pages limited. We will extensively report on these results in further publications.

Their page for the religiosity survey (dead link) also has an empty section under "Results".

All I can say about this survey is that some parts of the final report (dead link, large PDF) seem to assume that all Muslims are practicing. If that is the case, then 6% of Europeans in 2010 were practicing Muslims, while the percentage of practicing Christians in each country could be either less or more than that.

[edit: The organization ORELA has numbers for Belgian francophones: practicing Catholics outnumber Muslims in total, but practicing Muslims outnumber Catholics in the city of Brussels, and among children.]

This makes Mr. Geens' claim seem much more reasonable, although it's hard to measure exactly. It does depend on his definition of "Europe," since while he may be judging France accurately, Poland has very few Muslims and very high church attendance, and other countries are in between (see map, above).

An advance article was released to the journal Sociology of Religion entitled, "Attitudes toward Abortion among the Muslim Minority and Non-Muslim Majority in Cross-National Perspective: Can Religiosity Explain the Differences?" This article uses the EURISLAM religiosity data that was never uploaded to the EURISLAM website. It contains the following statistic: 10% of non-Muslims in Belgium, France, Germany, Britain, and Switzerland consider themselves to be "practitioners," as opposed to 50% of Muslims. This data comes from before the refugee crisis.

As I discussed in my answer to Is “No Religion” world's fastest growing religion?, in the 1960s there was a general belief that populations would lose their religion as they became "civilized" or "post-industrial", but after the 1980s this hypothesis was widely discarded. Instead, it is recognized that some groups secularize and others do not.

To give a common-sense example, some liberal Christian populations in America became more secular after the 1960s, but others became more fundamentalist.

Sociological research indicates that Muslims in Europe do not secularize in the manner attributed to liberal American Christians in the 1960s.

Obviously it is impossible to judge how many "practicing Muslims" there will be in Europe "very shortly," but with current demographic trends there is no indication that the population will lower.

Not the answer you're looking for? Browse other questions tagged politics islam europe demographics .

14
Do low-income Americans drink more Coca-Cola than their counterparts?
16
Have more British Muslims joined Islamist groups than serve in British armed forces?
11
Are five million Muslims marching on to Europe?
49
Did Christians kill thirty to fifty times as many people in political violence as Muslims in the 20th century?
16
Are Muslims 25 times more likely to commit terrorist attacks within the United States than non-Muslims?
9
Will the United States be made up of more non-whites than whites by 2046?
48
Have there been more than 27,000 Islamic terrorist attacks since 9/11?
8
Did Jean-Claude Juncker claim that more than 80% of EU citizens want to abolish daylight saving time?
10
Did Europe have a Covid-19 case in December 2019?