Is 2016 cursed for celebrities? [closed]

Here in the UK, it seems like every single day this year there has been another celebrity death. Before we have chance to mourn them or celebrate their achievements, another one pops off. People are speculating who will be 2016'ed tomorrow.

See for example this article in the Telegraph

The death of the musician Prince, at the age of 57, just a day after Victoria Wood died from cancer, aged 62, has shocked their millions of fans. But it also appears to prove that 2016 is cursed in some way.

What's going on? Are the celebrities really dying faster than usual, or are we just reporting on them more? Has the level of celebrity whose death gets reported dropped, and is that even measurable? Or - chillingly - is everyone dying off faster, and we're just hearing about the famous ones?

There's clearly no "curse". There are objectively measurable indicators that can be compared between years, and these do appear to suggest a sharp increase in 2016, approximately double that of recent years, for deaths of people considered celebrities in the UK, without any one obvious apparent causal event (such as a helicopter crash). That said, these are still small numbers (lower end of two figures), and occasional spikes, anomalies or clusters in small data sets aren't unusual and don't normally require a causal explanation.

The same evidence shows the number of deaths of people considered celebrities was rising already, which can be easily explained by mass media reaching a certain age.

There's an objectively measurable of "celebrity" deaths - obituaries written in news publications. Note that these are typically written while a celebrity is still alive then kept on file, so an "obituary use" represents an editorial team's judgement that an individual is a celebrity of note made well before and independent to any public reaction to their death, and most likely written well before 2016 (therefore not a self-fulfilling response to the so-called "2016 effect"). It's obviously not a perfect classification (no human judgement based classification is), and its quality depends on the quality of their editorial process, so I've taken three examples from three different respected UK publications with different approaches: 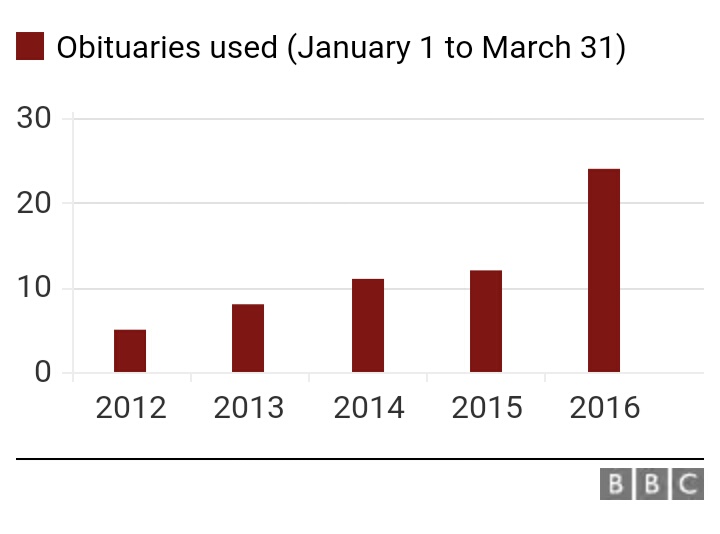 They discuss whether this could be explained by expansion of the facility of the BBC to write and publish obituaries, and find that the number of celebrities with obituaries written and kept on file in case of their death is increasing, but at a rate of "a few more every week", following a process that hasn't significantly changed in 10 years, with no one event that would explain a doubling from 2015 to 2016 other than random clustering.

This therefore addresses the question:

Are the celebrities really dying faster than usual, or are we just reporting on them more?

The BBC have had a consistent policy for 10 years which is based on steady inflation through a team actively increasing the number of obituaries on file every week, but 2016 is an anomaly that bucks the trend.

The above article reports:

Again, the number is roughly double that of recent previous years.

The Guardian offered some measurable figures in terms of the number of deaths which they ran as the main headline of their print edition: 7 so far (one of which, being a sportsman, was printed in the sports section but as the main back-page headline).

I can't find a direct comparison to equivalent periods in other years, am still looking, but it's discussed as being remarkable:

The tally of deaths is significant, and 2016 is not yet four months old.

They offer one more observation:

The Guardian’s obituaries page, according to its editor, is no longer able to fit in all the public figures who would have historically figured on the page because of the rise in high-profile deaths

In the Guardian's case, like the BBC, this therefore suggests that the number of obituaries they want to publish in 2016 is driven by events, not an editorial decision: events are causing them to exceed their physical limit.

With this, they offer a partial explanation for the upward trend:

The nature of fame and celebrity has changed radically in the past decade... As well as actors, musicians, royalty, sporting figures, politicians and the like, there are now hundreds of reality TV stars, comedians, game show hosts, mavericks and people famous simply for being famous. That means there are far more celebrities whom more people will have heard of when their number is up.

Or - chillingly - is everyone dying off faster, and we're just hearing about the famous ones?

Since there's no celebrity death spike outside the UK, we only need to look at UK mortality statistics here. The UK Office for National Statistics publish weekly death statistics, and offer a comparison to the last 5 years week-by-week. They haven't yet published an analysis comparing 2016 to other years, or age-standardised rates, but a simple look at the raw numbers of deaths shows that the increase between 2016 and the previous 5 years appears smaller than the increase between 2015 and the previous 5 years (around 3% compared to around 7% from 2015).

No, there is no evidence of a supernatural curse affecting celebrities. In fact, there isn't even any evidence that 2016, to date, is a particularly bad year for celebrity deaths.

The article Prince dead: Is the celebrity death curse of 2016 really a thing? looks at this issue.

So if the famousdeadpeople database is to be relied upon, 2016 isn't an especially dangerous time to be a celebrity. 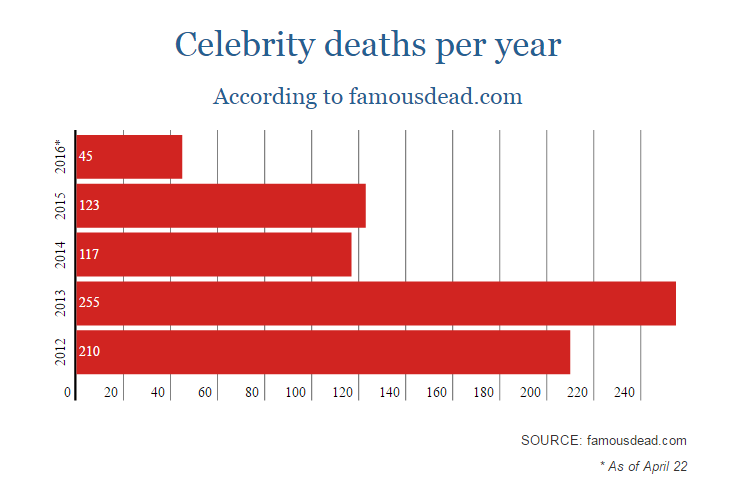 This is not an easy question to answer quantitatively. For one thing 'celebrity' or 'famous person' is a subjective term. One person's celebrity is another person's nobody.

Not the answer you're looking for? Browse other questions tagged mortality united-kingdom celebrities .

12
Did a disproportionate number of celebrities die in 2016?

16
Is there a higher divorce rate among celebrities?
6
Are the 2016 UK guidelines on alcohol consumption evidence based?
5
Do celebrities have their body parts insured?
12
Did a disproportionate number of celebrities die in 2016?
6
Did a large number of celebrities threaten to go on strike until Trump resigns?
21
Was UK national debt higher in 2016 than 2010?
21
Was 2016 the Deadliest year for the LGBTQ community?
44
Is austerity in the UK responsible for "120,000" extra deaths?