A set of photos from a Russian web-site apparently show Stonehenge being built in the 1950s, rather than the more customary dates of 3000-2000 BC. 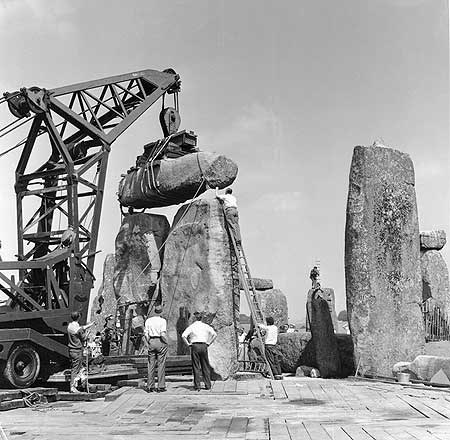 An conspiracy theory web-site Max Resistance attempts to explain the claims in English:

Was Stonehenge built (or rebuilt) in or around 1954?

STONEHENGE, Wiltshire. Re-erection of Trilithon lintel 158 by the 60 ton 'Brabazon Crane', the larger of two cranes used to lift stones. The lintel is being lowered and man-handled into its final resting position on upright stones 57 and 58

While Stonehenge definitely existed before 1954, with photographs going back to the 1867, it has not been simply left to the forces of nature over the past couple centuries, but instead has been subjected to further human activity such as stabilization and restoration efforts.

See RESEARCH REPORT SERIES no. 06-2014 STONEHENGE WORLD HERITAGE SITE LANDSCAPE PROJECT ‘RESTORING’ STONEHENGE 1881-1939 for historical photographs and an explanations of modern changes to the site in that period of time and later.

Numerous references, such as Stonehenge by Malone and Barnard confirm that:

And according to the New Scientist article Concrete evidence:

virtually every stone was re-erected, straightened or embedded in concrete between 1901 and 1964...

...The first restoration project took place in 1901. A leaning stone was straightened and set in concrete, to prevent it falling.

More drastic renovations were carried out in the 1920s. Under the direction of Colonel William Hawley, a member of the Stonehenge Society, six stones were moved and re-erected.

Cranes were used to reposition three more stones in 1958. One giant fallen lintel, or cross stone, was replaced. Then in 1964, four stones were repositioned to prevent them falling.

The 1920s ‘restoration’ was the most “vigorous”, says Christopher Chippindale of the Cambridge University Museum of Archaeology and Anthropology. “The work in the 1920s under Colonel William Crawley is a sad story,”

For early descriptions of Stonehenge, see the 1740 Stonehenge: A Temple Restor'd to the British Druids and the 1747 Choir Gaure, Vulgarly Called Stonehenge, on Salisbury Plain. Unfortunately Google Books omits many of the drawings in these books, but the 1747 is considered the earliest quantitatively accurate description.

Between pages 32 and 33 of the 1740 book, there is a drawing of Stonehenge dated August 1722, showing that it was reasonably similar then as now.

Stonehenge as photographed in 1867 (see second link in answer above): 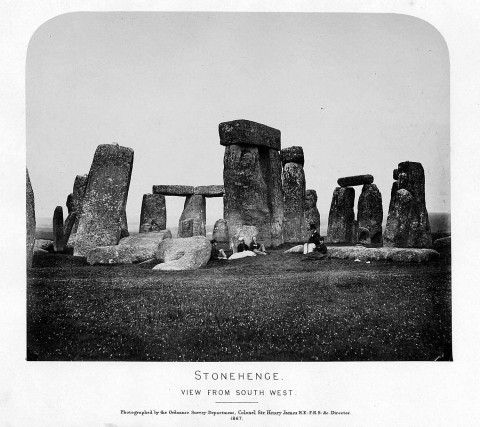 In order for this MASSIVE STONEHENGE CONSPIRACY to work, the conspirators would have to avoid some basic slip-ups... for example, taking photos of the construction process, or talking openly about their work to the national newspapers and inviting people to come visit.

“Anyone who comes to Stonehenge just now in a fortunate hour may see a wonderful sight. He may see the lintel stone of one of the mighty trilithons, swathed in timbers and gripped in the clutch of a crane, dangling in mid-air over its two pillars.” (Salisbury Times, April 1920)

As the article reports, Stonehenge was reconstructed a bit in those years: visitors had chipped so many souvenirs off the trilithons that they were in danger of collapsing, so they were filled in with concrete.

More photos and additional disorganized debunking is available in this forum thread.

It is very easy to find evidence of the sites existence from non-British sources prior to 1950.

Just to take the first couple of examples that I found

He wrote in his journal on November 1843: "In the oldest poems only the most simple and enduring features of humanity are seen, such essential parts of a man - as stonehenge exhibits of a temple"
...
Carlyle and Emerson visited Stonehenge, to which Emerson devoted a full chapter in English Traits.

Sam Hill was the visionary who heaved up this 'henge, a wealthy railroad and utilities magnate who was also an early crusader for modern roads.

Hill bought 7,000 acres of empty land along the Columbia River in 1908. He founded a town named Maryhill, and tried to lure Quaker farmers to settle it. None came. A few years later the town burned in a fire.

In 1918, Hill surveyed what was left of Maryhill, chose the most dramatic spot (a windswept promontory high above the river), and knocked down an Inn that he had built there. Then he began erecting a full-size, astronomically-aligned replica of Stonehenge.

Because it has a neolithic context. Many neolithic places have been found, like Stonehenge and near Stonehenge... They became visible with the help of radar,

What happened in 1950-1954... It's the awful business of "restauration" I'm afraid. On many of these neolithic megaliths, non-reversable changes were performed over the centuries, to "preserve the arrangement". With skill.. or without skill, resulting in irreversible and harmful changes to the monument, like the one described here.

On the other hand, if we don't attempt to preserve this kind of heritage, parts will simply break off. Fall to the ground. Unless documented, any restoration will cause information to get lost, details in the original context to get lost. For archaeologists, Stonehenge is not that interesting any more.

Which does not mean I did not enjoy my stay last time, as a tourist, a few years ago. This place really breaths the past! It is impressive to see the surroundings of Stonehenge in the morning dawn.

85
How were the pyramids built?
18
Were "Ancient Astronauts" or extra-terrestrials responsible for the construction of Stonehenge?
12
Was a monkey hanged as a French spy in Hartlepool?
14
Were the pyramids at Puma Punku built by humans?
42
Were metered taxis busy roaming Imperial Rome?
17
Was David Cameron linked to "Hang Nelson Mandela" posters in the 1980s?
5
Did the Britons stop growing crops in the time between 3300BC & 1500 BC?
16
Was 17 the average life expectancy in Liverpool in the 1850s?