Is food still safe to eat within 5 seconds after being dropped on the floor (5 second rule)?

Today in the cafeteria my friend dropped a chicken wing on the floor and immediately picked it up and ate it. Afterward he claimed that the chicken wing was still safe to eat if it was consumed within 5 seconds after being on the floor. He said that it's the "five second rule". Is this rule safe to follow? 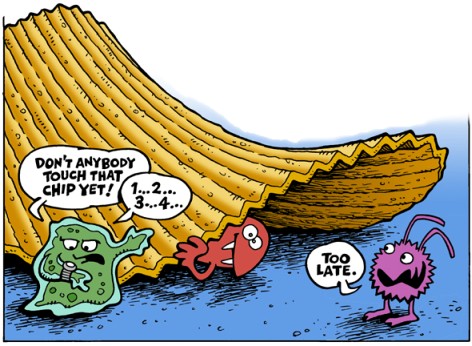 Jillian Clarke researched this in 2003 when she was a high school science intern at the University of Illinois.

Clarke was awarded the 2004 IG Nobel Prize in Public Health for her work.

Food Scientist Paul Dawson at Clemson University also looked into it.
His findings were published in the Journal of Applied Microbiology:

Three experiments were conducted to determine the survival and transfer of Salmonella Typhimurium from wood, tile or carpet to bologna (sausage) and bread.

In the case of the 5-second-rule we found that bacteria was transferred from tabletops and floors to the food within five seconds, that is the 5-second-rule is not an accurate guide when it comes to eating food that has fallen on the floor.

The MythBusters also busted the 5-second-rule:

Even if something spends a mere millisecond on the floor, it attracts bacteria. How dirty it gets depends on the food's moisture, surface geometry and floor condition — not time.

Here is the video.

While perhaps not a real answer for the question, I would like to highlight some grass roots skepticism that a question such as this can be the basis for. An actual scientific study on this phenomenon/saying was conducted by a High School senior. See, ANYONE can do real science, and it may even prove interesting to folks.

Yes, someone really has conducted a scientific study of the five-second rule. It was the project of high school senior Jillian Clarke during a six-week internship in the food science and nutrition department at the University of Illinois at Urbana-Champaign. Meredith Agle, then a doctoral candidate, supervised the study.

"Jillian swabbed the floors around the University in the lab, hall, dormitory, and cafeteria to see how many organisms we could isolate," Agle tells WebMD. "We examined the swabs, and there were very few microorganisms. That surprised me. I told her to do it again."

The results were the same. Agle has since earned her doctoral degree and is a scientist in new product development for Rich Foods in Buffalo, N.Y. "I think the floors were so clean, from a microbiological point of view, because floors are dry, and most pathogens — like salmonella, listeria, or E. coli — can't survive without moisture."

Just remember, if it's cake on the floor, it's a lie!

Larian LeQuellaLarian LeQuella
44.9k1818 gold badges186186 silver badges208208 bronze badges
Add a comment  |
1
Want to improve this post? Provide detailed answers to this question, including citations and an explanation of why your answer is correct. Answers without enough detail may be edited or deleted.

it is, in fact, 30 seconds for wet food, or much longer for dry food, according to this study

Not the answer you're looking for? Browse other questions tagged medical-science hygiene .

10
Is washing fruits/vegetables with water useful?