Did the ancient Egyptians call aloe vera "the plant of immortality"?

I came across the following on facebook (it linked to this article): 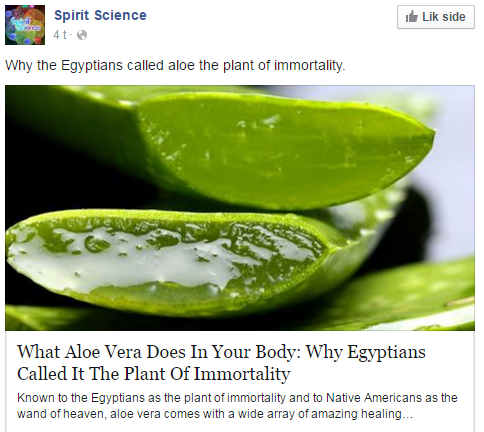 I was wondering whether that is actually true. Did the ancient Egyptians call aloe vera (and possibly other related species) the "plant of immortality"? Is this something we can possibly know?

Rudimentary google searches came up with three kinds of results: Either someone selling aloe products, or an article just like the one above, or some blog promoting hermal remedies and "natural living" in general. None of them are what I would consider trustworthy on the issue.

Note: I do not doubt the claim that the plant was known to the ancient Egyptians (the plant probably originated from that part of the world, and herbal remedies are an old tradition), and I'm not asking about any medical effects it might have.

Well, actually, the headline of that article is almost correct, but by accident. It was not the ancient Egyptians who considered aloe a symbol of vitality, but the Egyptians of 1825, according to an Orientalist named Edward William Lane who visited the city of Cairo in that year. He wrote:

It is a very common custom in Cairo to hang an aloe plant over the door of a house particularly over that of a new house; or over a door newly built: and this is regarded as a charm to insure long and flourishing lives to the inmates and long continuance to the house itself. (source)

It appears that through some kind of slow osmosis this turned into a myth about the "plant of immortality" in New Age pamphlets sometime around the 1970s or 1980s.

The ancient Egyptians had no special interest in aloe, as we learn from the popular book Aloe - Myth, Magic, Medicine: Aloe Vera Across Time (Universal Graphics, 1989):

While the Papyrus Ebers gives only general directions for preparation of the leaf (such as grind up and pulverize), it plainly states that Aloe was mixed with other substances such as frankincense, myrrh, honey, juniper berry, mint, unknown green leaves, deerhorn, and others. (p. 63)

In fact, I cannot find any evidence that we even know their word for aloe. I think this book's claim is based on a 1930 "translation" of the Papyrus Ebers by Cyril P. Byran, but that work seems to be considered highly suspect; it's a "'rendition into English of German and other translations of the Egyptian original,' is fragmentary, and is full of satiric editorial comment."

John F. Nunn's seminal work Ancient Egyptian Medicine does not contain an entry for aloe in his table of herbs with "considerable agreement for the meaning of the Egyptian word," nor does it show up in E.A. Wallis Budge's dictionary of hieroglyphics. "Aloe" does not show up in the translation of the Edwin Smith surgical papyrus, and as above, its use in an early English translation of the Ebers papyrus was spurious.

Not the answer you're looking for? Browse other questions tagged history consumer-products .

11
Did ancient Indians invent guns, lasers, radars and nuclear weapons?
29
Did Sir Arthur Conan Doyle call J.B. Rhine a "monumental ass" in print?
25
Did ancient Chinese frontline troops decapitate themselves to scare their foes?
32
Did the Ancient Egyptians use twenty-sided dice?
2
Did Herodotus call Egypt the "Gift Of The Nile"?
22
Did 120,000 Egyptians die building the Suez Canal?
24
Did 3000BC Egyptians use meteoric iron weapons?
1
Did ancient Hindu texts describe the existence of photons as early as 3100 BCE?