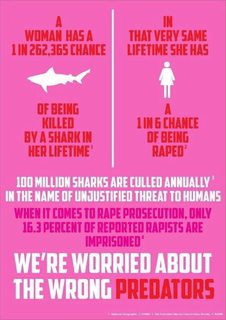 In that very same lifetime she has a 1 in 6 chance of being raped.

100 million sharks are culled annually in the name of unjustified threat to humans.

When it comes to rape prosecution, only 16.3 percent of reported rapists are imprisoned.

We're worried about the wrong predators."

I'm suspicious the infographic is conflating the total number of sharks killed with those killed for human protection.

Related question: Are 100 million sharks killed by humans per year? , which asks about the numbers killed by fishing.

The Australian Marine Conservation Society's web site is http://www.marineconservation.org.au/ . Doing a search for shark cull million on their web site gets as the first hit Government on shark watch as cull shelved

Yet despite being essential to a healthy marine environment, the world's shark populations are experiencing significant decline, with perhaps 100 million or more sharks being lost every year. The increased demand for shark meat and shark fin makes them especially vulnerable to overfishing.

According to The Australian Marine Conservation Society, the international trade in shark fin is widely believed to be responsible for causing the decline in so many shark populations around the world. They say Australia is complicit in driving our global shark populations closer to extinction by our role in the international shark fin trade (a single shark fin fetches $1000 in Sydney's or Melbourne's Chinatowns).

While it's true that an article on culling mentioned the number 100 million, a closer reading indicates that it's saying that 100 million are all shark kills, not those being culled.

As a side note, the article is from Phys.org (Wikipedia article), with the society merely hosting a copy of the article.

Other pages on the society's web site give different estimates for how many sharks get killed. For example, this page, which seems to be original content, gives an estimate of 73 million per year.

Not the answer you're looking for? Browse other questions tagged gender sociology ecology sharks .

25
Have one in ten women suffered rape in the UK?
12
Are 100 million sharks killed by humans per year?

12
Are 100 million sharks killed by humans per year?
58
Are sharks a threat to undersea cables?
3
Are sharks primarily hunted for Chinese cuisine?
13
Are species becoming extinct at a rate of 0.01%-0.1% per annum?
24
Do Americans use 500 million straws per day?
18
Are men more likely than women to accept an offer for casual sex?