Is 8% of human DNA from viruses? 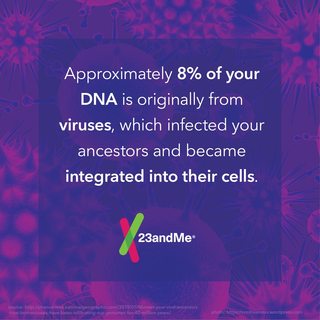 Approximately 8% of DNA is originally from viruses, which infected your ancestors and became integrated into their cells.

Normal viruses infect cells in order to take advantage of cellular mechanisms to reproduce themselves. A class of viruses known as "retroviruses" have a slightly peculiar mechanism to achieve this - they synthesise a special enzyme called "reverse transcriptase", which translates their own RNA into DNA which is incorporated into the host cell's genome. The host cell then replicates the virus' DNA alongside the rest of its own.

Should a retrovirus happen to infect a germ line cell - i.e., a sperm or an ovum - the retroviral DNA will be copied into the offspring's DNA. And their offspring. That's called an "endogenous retrovirus". Some cause or contribute to cancers - and sometimes (for example) that DNA even gets co-opted for a useful purpose.

Given thousands or millions of generations, these endogenous infections accumulate. It doesn't even have to be independent infections - when a cell is infected it produces new copies of the RNA virus which can insert itself again somewhere else in the germline genome - even across the generations. They eventually tend to get deactivated by one mutation or another, but phylogenetic studies have shown that the some 98,000 retroviral elements and fragments in the human genome come from relatively few infections.

Estimates vary - many of the retroviral sequences have been modified by mutation over the aeons, making it hard to find them all - but recent estimates do come to about 8% of the human genome having a retroviral origin. There's a fair chunk of virus in all of us.

I wish to add to the above answer. Approximately 9% of the genome is viral in origin, but current research suggests there is less of 'you' than there are other viral related sequences. Here is a very nice listing of the percentages of various genetic elements within the human genome: http://sandwalk.blogspot.com/2008/02/theme-genomes-junk-dna.html

Although viral related sequences may comprise 9% of our DNA, there are other elements than can be considered pre-viral in origin called transposons. Our genome is composed of 44% of these elements. Add to these viral like sequences regulatory elements and telomers that are non coded and you will see our genome is more non-coding 'junk' DNA than it is genes essential for the expression of human proteins or regulation. In fact, 65% of our genome has no known function at all and may be considered non-essential fossil elements according to the http://www.sciencealert.com/not-dead-yet-junk-dna-is-back https://theconversation.com/human-genome-2-0-encode-project-debunks-junk-dna-9370

And don't think these fossils that clutter our genomic junk drawer are worthless. Studies have found many human genes were in fact initially of viral origin: http://schaechter.asmblog.org/schaechter/2014/06/retroviruses-the-placenta-and-the-genomic-junk-drawer.html

Thankfully most of these mobile genetic elements are currently inactive, but that hasn't always been the case. https://atlasofscience.org/the-fossil-viruses-from-within-that-shape-evolution/ http://grupo.us.es/gfnl/dna/genetic_ingeniering/transposons.htm

A recent study found one sequence, Alu, is found only in primates and may in fact be the agent that induced changes in our brains that allowed us to become human. https://www.ncbi.nlm.nih.gov/pmc/articles/PMC4196381/

Probably more than you wanted to know, but 8% is probably an understatement for viral like elements in the human genome

The question assumes that organisms came before viruses. From the latest attempts to deduce what happened many years ago, a current belief is that viruses and organisms had a single originating organism. This means that in terms of the current species, the two likely already were subjects of Endogenosymbiosis, where one didn't necessarily directly come into existence before the other.

Currently most viruses have become so efficient that they lack the means to be remotely organisim-like, depending heavily on their hosts. But, there are the ancient viruses, like the pandoravirus, which contain about 2,500 protein encoding regions, a number larger than the number of genes in the smallest of free living organisms (1,400). These viruses may hint toward the structure of ancient viruses which split from their originating organisms.

This idea of co-evolution of organism and virus might flip the question on its head. "Is 8% of the DNA in a human cell sourced from human or near-human cells, by way of viruses?"

As for the misnomer "junk" DNA; we're finding out that rates of expression, DNA folding, and other factors that tend to impact the expressed portion invariably are side effects of some of that "junk" DNA. Instead of the 98% "junk" designation, the current belief is that about 80% of our DNA is "biochemically active" You certainly wouldn't get the same organism with the misnomered "junk" DNA removed.

Not the answer you're looking for? Browse other questions tagged genetics dna virus .

34
Length of uncoiled human DNA
16
Do humans share 99% of their DNA with rats?
9
Do commercial DNA synthesis labs maintain a "watch list" of dangerous DNA sequences?
8
Are DNA testing companies building a DNA database for commercial applications?
2
Was human DNA found in a sample of Priorix Tetra MMRV vaccine?
6
Does dry air promote the spreading of respiratory viruses better than wet air, ceteris paribus?
11
Are 40% of the oceans' bacteria killed by viruses every day?
6
Has SARS-CoV-2 been purified in a lab? If not, does this imply that the PCR test for it is not specific?