Is it possible to bake a cake with a phone inside, leaving the phone intact?

Recently the following picture has been circulating on some websites on the internet: 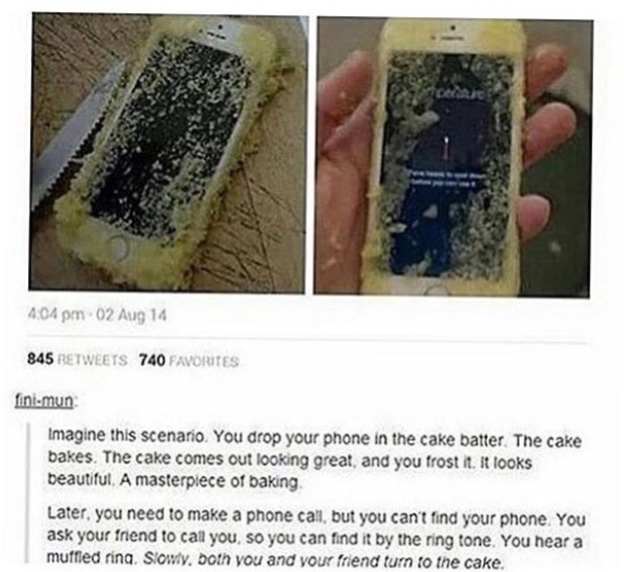 I highly suspect this is some kind of a fake. Is there any data on maximum operating temperature for a mobile phone versus the temperature inside a cake being baked? I know that many phones are waterproof so possibly immersion in cake batter would be survivable, but is baking?

It's possible, but unlikely.

Cakes cook from the outside in. If you are not careful you might pull out a cake cooked outside but raw inside. This happens when the oven is too hot.

What to do if my cake seems ready from the outside (it's brown as it should be) however it's not done yet inside? [...]

If you find that your cakes are brown on the outside but are still raw on the inside then it is likely that the oven is too hot.

In fact, there are cakes which are cooked that way on purpose, for example the chocolate lava cake

Furthermore, even in the case of full cooking, internal temperature rise to less than 100°C, which are high, but not massively outside the phone's operating range.

I've never seen any recipe that looks for an internal temperature of over 200F (93C). Bread is generally "done" at 190F (88C). At temperatures at or above the boiling point of water, you're getting into candy making territory

What is the maximum internal temperature of baked goods?

One should store an iPhone between -20°C to 45°C. This is what recommended by Apple and what presumably guarantees minimal to no chance of breaking. It's not unconceivable that phone might survive to temperatures of twice that range.

In fact, the phone in the picture shows the correct screen that should appear when an iPhone has overheated (same source as above): 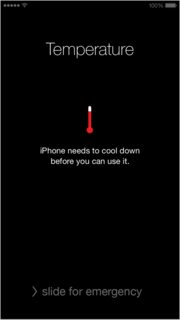 While it is possible, it's unlikely because checking whether a cake is cooked is very easy and therefore is commonly suggested. The technique is inserting a toothpick and checking whether it gets wet or dirty. This would have revealed the phone, of course.

[...] You can also check the cake by inserting a thin skewer, cake tester or cocktail stick (toothpick) into the centre of the cake. If the cake is fully cooked then the skewer will come out clean, if there is raw or partially cooked batter clinging to the skewer then return the cake to the oven for a further 5 minutes and test again. For rich fruit cakes the skewer test is the best way of checking that the cake is cooked all the way through.

The pictures are not fake. They are real photos of a phone baked into a cake, and then removed. However, the "Imagine this scenario. You drop your phone..." text is just imagination, not what actually occurred in making the photos.

The photos are frames from the video iPhone 5S Baked In Cake - Will it Survive?. In the video, the narrator, TechRax, deliberately puts the phone into the batter and cooks it. Afterwards, he shows that it still starts up, and displays the high temperature warning on the screen, but the video ends without demonstrating that the phone is fully functional.

The version in the OP was created from the video in several stages. The text was added here: http://fini-mun.tumblr.com/post/93694596620/imagine-this-scenario-you-drop-your-phone-in-the to an earlier twitter version of the pair of photos with even more misleading text.

Not the answer you're looking for? Browse other questions tagged mobile-phones cooking .

45
Can you test for microwave leaks by putting a cell phone inside and calling it?
31
Can you detect a hidden camera in a trial room/changing room with your phone?
3
Are the location of brain-tumours linked to which ear you use a cell-phone with?
4
Do 48% of women in the Arab world not own a mobile phone?
3
Does the Wowfixit screen protector harden phone screens?
6
Have people died by being shocked through the headphone cord of their cell phone?