Do the older slower wolves lead a wolf pack? 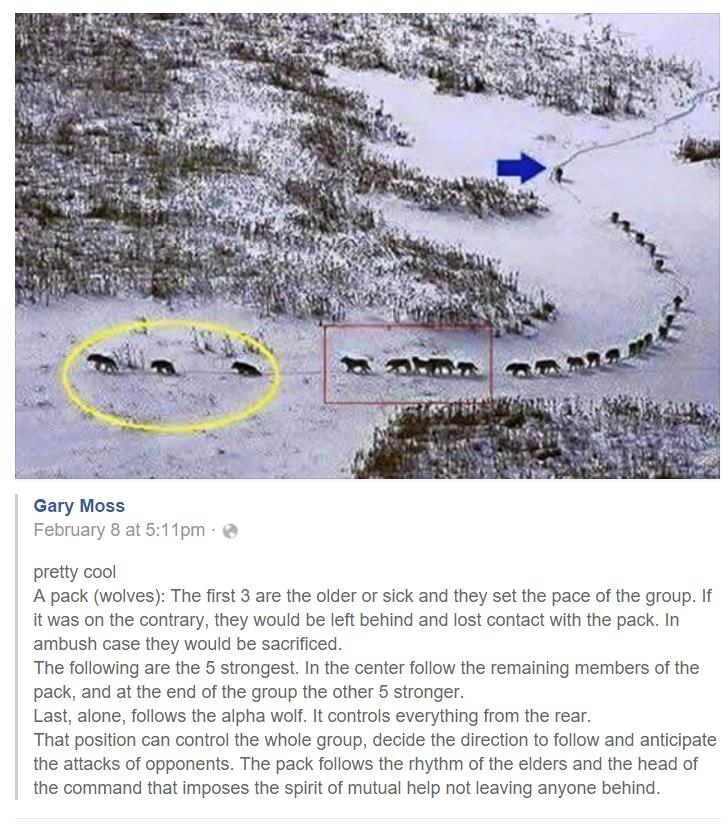 pretty cool
A pack (wolves): The first 3 are the older or sick and they set the pace of the group. If it was on the contrary, they would be left behind and lost contact with the pack. In ambush case they would be sacrificed.
The following are the 5 strongest. In the center follow the remaining members of the pack, and at the end of the group follow the other 5 stronger.
Last, alone, follows the alpha wolf. It controls everything from the rear.
That position can control the whole group, decide the direction to follow and anticipate the attacks of opponents. The pack follows the rhythm of the elders and the head of the command that imposes the spirit of mutual help not leaving anyone behind.

No, the pack is led by the alpha (breeding) females.

The picture is taken from the BBC 2011 documentary Frozen Planet. This Guardian article which features pictures from the documentary describes the picture as:

A massive pack of 25 timberwolves hunting bison on the Arctic circle in northern Canada. In mid-winter in Wood Buffalo National Park temperatures hover around -40C. The wolf pack, led by the alpha female, travel single-file through the deep snow to save energy. The size of the pack is a sign of how rich their prey base is during winter when the bison are more restricted by poor feeding and deep snow. The wolf packs in this National Park are the only wolves in the world that specialise in hunting bison ten times their size. They have grown to be the largest and most powerful wolves on earth

Snopes has an article on the picture which also include the history of the post, and also a note about the use of the term "alpha" for wolf packs.

The screenshot included in the question contains a block of text with a long interpretation by someone named Gary Moss. Moss's interpretation is that packs of wolves have alpha animals, which go in back, while older, weaker animals go in front. Supposedly the alphas "control the whole group" from behind.

The whole concept that a wolf pack is led by an alpha animal turns out to be incorrect. The alpha concept was based on studies of animals kept in cages, where they don't behave normally. It was debunked in a 1999 paper by L. David Mech. Here is the abstract of the paper:

The prevailing view of a wolf (Canis lupus) pack is that of a group of individuals ever vying for dominance but held in check by the "alpha" pair, the alpha male and the alpha female. Most research on the social dynamics of wolf packs, however, has been conducted on non-natural assortments of captive wolves. Here I describe the wolf-pack social order as it occurs in nature, discuss the alpha concept and social dominance and submission, and present data on the precise relationships among members in free-living packs based on a literature review and 13 summers of observations of wolves on Ellesmere Island, Northwest Territories, Canada. I conclude that the typical wolf pack is a family, with the adult parents guiding the activities of the group in a division-of-labor system in which the female predominates primarily in such activities as pup care and defense and the male primarily during foraging and food-provisioning and the travels associated with them.

10
Is the "Alpha Wolf" theory debunked?