Dalia Mortada writes for PBS in Did Food Prices Spur the Arab Spring?:

One of the driving forces behind the Arab Spring, some contend, is the high cost of food. A combination of shrinking farmlands, weather and poor water allocation is helping contribute to higher prices and, in turn, anti-government sentiment, according to analysts.

Peter Thiel said in an interview:

I think the Arab Spring, I think the fundamental driver for that was the food prices went up 50 percent and people were going to starve and I think it’s smug and complacent to pretend that it was anything other than that.

Was the Arab Spring caused by rising food prices?

On one hand, slogans of the Arab Spring included chants about access to bread, and there is a strong correlation between the FAO Food Price Index and two waves of protests. The dotted blue line here shows the date of a warning from the authors of the cited paper that protests would occur: (source) 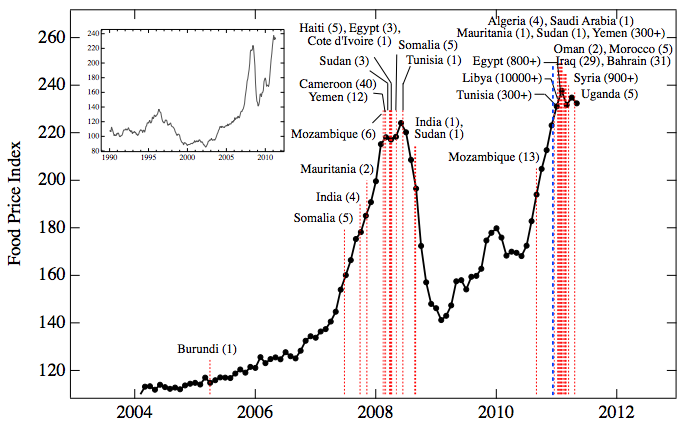 On the other hand, one source denies any correlation between the Tunisian food price index and the start of protests, and points out that a public announcement that food prices would be lowered did not stop the protests. (source) Furthermore, in other countries like Morocco, Jordan, and Algeria, people spend 40% of their budget on food, compared to 6% in America, but despite protests and riots those governments were not overthrown. (source)

From this we can gather that the Arab Spring was different from the 2007-8 food riots in its political motivations and desire for regime change, as well as the weakness of the governments being protested against. Food prices may have been a "spur" but people's motivations were more multifaceted than that, as evidenced by the state of the Arab world today.

Not the answer you're looking for? Browse other questions tagged history africa .

32
Did the early dark ages exist?
16
Was the practice of eating fish during Lent started by the church to spur the economy of Italy?
32
Does the United States throw wheat in the ocean to keep the prices high?
8
Was the combination of yoghurt and honey called "the food of the gods" in ancient Indian records?
21
Did the ballet/orchestral work 'The Rite of Spring' provoke a riot?
23
Did Malian sailors reach the Americas in 1311 CE?
13
Did an experimental Oral Polio Vaccine (OPV) cause the AIDS pandemic?
7
Did Libyan brides get a USD 90000 dowry from the government?
31
Did 60% of polled South Africans say the country was better run during apartheid?
5
Did Uganda's president Yoweri Museveni hand the national flag to intercessors in 1997 in the midst of a Christian revival?