Did Donald Trump say republicans are the dumbest voters in the country? 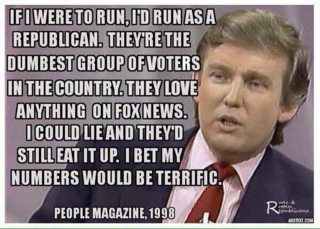 If I were to run, I'd run as a republican. They're the dumbest group of voters in the country. They love anything on FOX News. I could lie and they'd still eat it up. I bet my numbers would be terrific.

Is this an actual Trump quote, or is it made up?

No, it's fake. Snopes looked into it thoroughly: (same wording, different image)

Despite People's comprehensive online content archive, we found no interview or profile on Donald Trump in 1998 (or any other time) that quoted his saying anything that even vaguely resembled the words in this meme. Trump appeared somewhat regularly in the magazine's pages before he came to star on The Apprentice, but the bulk of the magazine's celebrity-driven coverage of him back then centered on his marriages...

It then discusses many examples of Trump talking politics in 1998 and 1999, and they're all fairly incompatible to what it says here, in tone and content.

Personally, the thing that immediately struck me as obviously false in that quote is how it talks about the modern relationship between Fox News and the Republican party, but attributes the quote to 1998, before Fox News had any remotely similar cultural impact. Snopes again:

Notable about the image's apparently spurious Trump quote is its purported reference to Fox News in 1998. While the Fox News Channel was rolled out across major American news markets between 1996 and 2000 (and thus isn't entirely chronologically out of place in a circa-1998 quote), the network wasn't nearly as prominent or widely watched until the 2000 election of George W. Bush, the September 11th attacks in 2001, and the start of the Iraq War in 2002. Before that time, although Fox News was making its way into living rooms across the United States, it was not exceptionally well-known (or particularly regarded as a right-leaning outlet) in 1998.

The photo in this particular version of the image appears to be taken from an interview with Oprah from 1988. He does discuss the idea of running for president in this interview, but the tone couldn't be more different: he's remarkably measured and complimentary about the other candidates.

Not the answer you're looking for? Browse other questions tagged united-states politics quotes donald-trump .

1
Did Donald Trump say this about Republicans?
108
Are crime rates up by 10% in Germany?