Is AD/HD over diagnosed within the US

I'm trying to determine if this is true, to the best of our ability; which admittedly is very difficult. Assuming we accept AD/HD exists as a disorder which can and should be treated in some individuals can anyone provide studies which could indicate the likely level of over diagnoses within the US. Actually, to be more exact can anyone point to studies on number/percentage of individuals likely to have been misdiagnosed with AD/HD when they do not have it; or how those rates of false diagnosed as AD/HD may compare to other nations.

This is a difficult question for several reasons:

From a WebMD article:

Some say the disorder is a modern problem, one that "didn't exist" when your parents and grandparents were growing up. People point to the fact that the number of American children 4-17 who've been diagnosed with ADHD increased 42% between 2003 and 2011. But does that mean more people have the condition than ever before? Again, the facts are a bit murky.

[Mandi Silverman, PsyD, a clinical psychologist at the ADHD and Disruptive Behavior Disorders Center at the Child Mind Institute replies:] "Our answer is that there's more awareness, more research, and we have more sophisticated assessment tools."

There's also significant variation even within the US; from the same aritcle:

Another ADHD-related mystery is that rates seem to vary a lot based on geography. More than 13% of children in certain states -- including Alabama, Arkansas, Kentucky, Ohio, Rhode Island, and South Carolina -- have been diagnosed with the disorder. Yet other states -- including California, Colorado, and Nevada -- report diagnosis rates of 7% or lower.

There are also big differences in the number of people who are diagnosed with ADHD around the world. For example, some surveys have found that 11% of children in Australia have been diagnosed, compared to less than 3% in the United Kingdom.

Since in the US the criteria are the same, the difference can only come from training differences of the mental health professionals applying the diagnosis and/or variation in the pool of children that are screened in the first place... The CDC has some potential insight into the latter, with racial and insurance variation:

An intriguing explanation of the geographic varioation within the US is found in a 2013 NYT article:

Even after [Stephen] Hinshaw’s team accounted for differences like race and income, they still found that kids in North Carolina were nearly twice as likely to be given diagnoses of A.D.H.D. as those in California. [...] In trying to narrow down what those influences might be, Hinshaw evaluated differences between diagnostic tools, types of health insurance, cultural values and public perceptions of mental illness. Nothing seemed to explain the difference — until he looked at educational policies.

The No Child Left Behind Act, signed into law by President George W. Bush, was the first federal effort to link school financing to standardized-test performance. But various states had been slowly rolling out similar policies for the last three decades. North Carolina was one of the first to adopt such a program; California was one of the last. The correlations between the implementation of these laws and the rates of A.D.H.D. diagnosis matched on a regional scale as well. When Hinshaw compared the rollout of these school policies with incidences of A.D.H.D., he found that when a state passed laws punishing or rewarding schools for their standardized-test scores, A.D.H.D. diagnoses in that state would increase not long afterward. Nationwide, the rates of A.D.H.D. diagnosis increased by 22 percent in the first four years after No Child Left Behind was implemented.

The WebMD article also claims that

A recent review of studies concluded that the true rate of ADHD among children is pretty similar throughout Asia, Africa, Australia, Europe, and the Americas.

without a clear reference, so I'm guessing it might be pointing to the highly cited (>1500 in GS) 2003 review of Faraone et al.. Here's the summary of findings (keep in mind that it predated DSM-5): 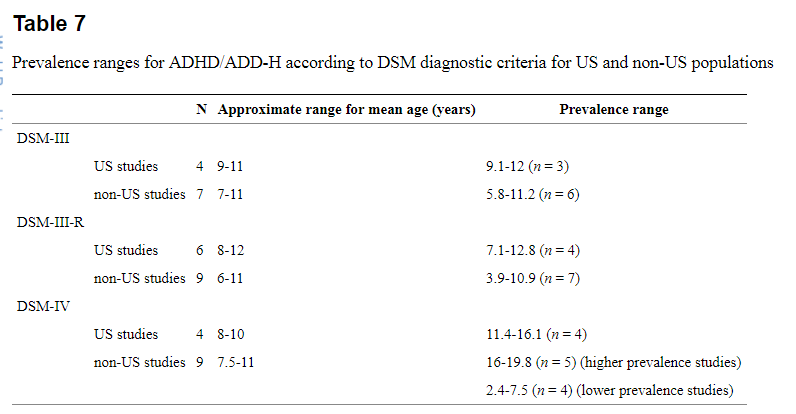 ​Table 7 shows the range of prevalence rates for US and non-US populations for the three DSM diagnostic criteria when outlying values have been excluded. Comparison of the prevalence range for the US studies shows that the highest prevalence is reported when using DSM-IV criteria, as has previously been shown by Wolraich et al (17) and Baumgaertel et al (16). The non-US studies also showed a higher prevalence of ADHD when using DSM-IV diagnoses. As ​Table 7 shows, the range of prevalence reported in the non-US studies is, for each diagnostic system, similar to that reported in the US studies.

Whether this exclusion is cherry picking or justifiable removal of outliers... you be the judge. The review does confirm the obvious fact that the more inclusionary the criteria is, the more children get diagnosed, regardless where they live.

geographic location plays a limited role in the reasons for the large variability of ADHD/HD prevalence estimates worldwide. Instead, this variability seems to be explained primarily by the methodological characteristics of studies

And exactly what was found to influence the results is summarized in the regression table below: 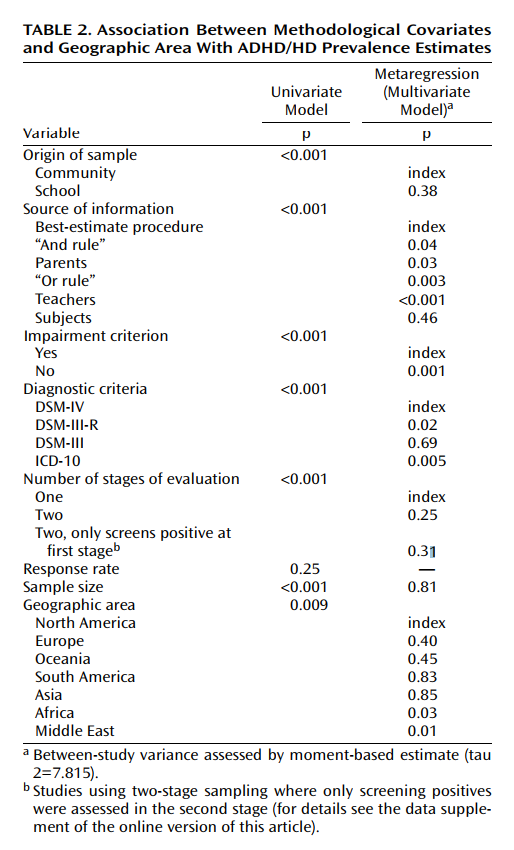 And here's the authors' explanation in words

It's notable that, in contrast, if you simply look at the prevalence rates geographically without taking into account all the other variables, there does seem to be an explanatory difference between Europe and North America. 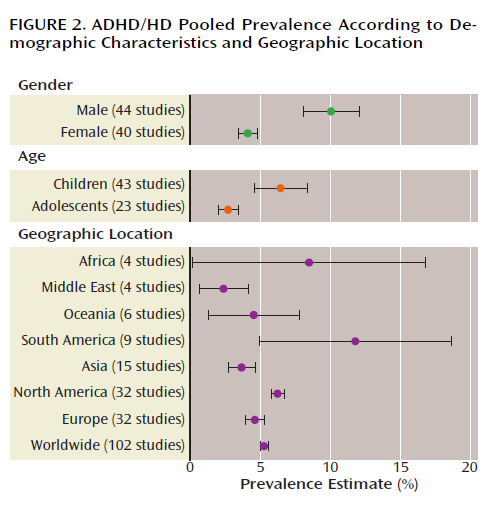 However this difference was better explained (in the authors' regression analysis) by the methodology used rather than by geography. The (sparse) data from Africa and the middle East however could not explained away by methodological variables alone. Hence the conclusion of the study that "geographic location plays a limited role".

One more thing to note is that some environmental/developmental factors affecting ADHD are known, in particular prenatal exposure to tobacco smoke. So potentially such factors could explain some/more of the geographic variation as well, although whether they do, I don't know.

Yes - Because of No Child Left Behind.

What, specifically, did you find out about the effect of these education policies?

Hinshaw: Thirty states, including all of the Southern states, passed these accountability laws before the No Child Left Behind Act — which, like the state consequential accountability laws, sets standards and establishes measurable goals in an effort to improve education outcomes for students — went into effect in 2002, so we were able to compare those 30 states to the other 20 before and after it became federal law to have consequential accountability. What we found was that standards-based education reform had likely played a large role in the nation's huge increase in ADHD diagnoses. Between 2003 and 2007, in those 20 states that didn't get consequential accountability until No Child Left Behind was implemented, we found a 59 percent increase in ADHD diagnoses among children who were within 200 percent of the federal poverty limit — so among the poorest kids in the state. Among middle- or upper-class kids in those states, there was only a 3 percent increase in ADHD diagnosis. That's a huge and statistically significant difference. But in states that had already passed the accountability laws before No Child Left Behind, rates of ADHD diagnosis only went up 20 percent, which is pretty much the national average, and there was no difference between poor and rich kids. Are we saying that consequential accountability is the cause? No. But there's a really strong association, and it's almost a smoking gun that when test scores really, really count in the public schools, for the poorest kids in a state, ADHD diagnoses go up dramatically shortly thereafter. What's the sum total of this? School policies really seem to matter, in a way that factors such as ethnicity, medical professionals and culture don't. Can we say they're the absolute and only cause of these state and regional differences? No, but they sure seem to be implicated.

18
Has the War on Drugs disproportionately affected minority communities?

3
Does orthodontic work cause (or contribute to) TMJD issues?
19
Gulf War Syndrome, is it real?
70
Is food still safe to eat within 5 seconds after being dropped on the floor (5 second rule)?
3
Is a new case of dementia diagnosed every 4 seconds?
6
Is there a link between strabismus and psychiatric illness?
2
Did the Red Cross cure 154 Malaria cases with MMS within 48 hours?
2
Do 38% of couples conceive within one month of trying to conceive?
3
Do statins contribute to dementia?
2
Were the Skripals attacked by use of Novichok?