Do prions qualify as living and, if so, do they argue for a second origin of life? [closed]

Not sure if there's a better Stack Exchange for this, but How could Darwin be sure all life has a common origin triggered this question.

As I understand it, prions are pretty much protein-based viruses. I know that there's no perfect definition of "living," but if you put a virus in that set, ought you not also include prions?

Is there any evidence of prions evolving from a xNA-based organism?

@OliverC spoke most directly to the thoughts I had in mind, which I suppose I can restate as a question about "natural origin of replicating, (perhaps) evolutionarily-capable entities." Admittedly, it requires a protein "environment" which originates from nucleic acids, but if prion replication began without evolving from, e.g., viral replication, then it seems to me an astonishing thing.

Prions are proteins and we all have them in us, in abundance.

PrPC is the normal form and actually good for us.

the abnormal form, the "evil twin" : PrPSc or PrPCJD 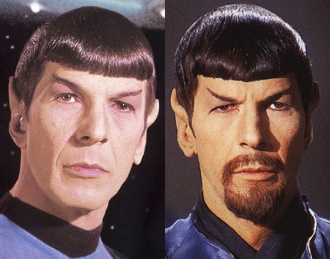 When the evil twin encounters the good twin things go awry, because

good joins the dark side and turns into evil 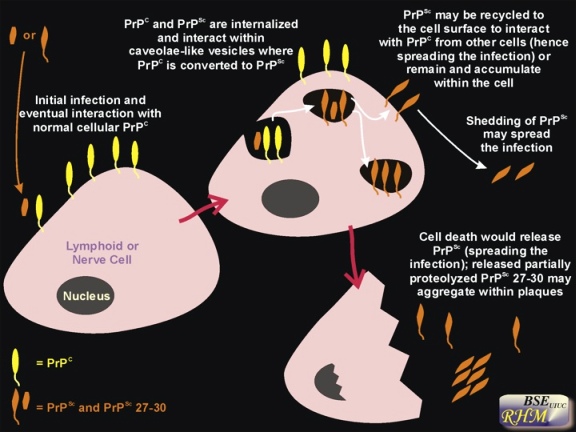 So like zombies or Agent Smith in The Matrix,

That's why it doesn't need DNA or RNA to reproduce.

Interestingly, prions might be able to evolve and adapt:

If prions can evolve, and if they can show the same sort of adaptive resistance as bacteria or fungi, does this mean that they are alive?

Charles Weissman doesn't think so on the grounds that prions are completely dependent on their hosts for reproduction. They need normal proteins that are encoded within the genome of their host to make more copies of themselves.

He says, "The remarkable finding that prions can mutate and adapt to their environment imbues them with a further attribute of living things, without however elevating them to the status of being 'alive'."

A common definition of life consists of the following characteristics:

You could argue that they fulfill the reproduction critera, as the disease-causing, misfolded prion protein PrPSc can convert other prions into the misfolded state. To reproduce PrPSc needs the whole protein synthesis machinery of the cell to produce normal prions it can convert, it cannot reproduce independently.

This does not mean they are alive, they don't fulfill any of the other conditions usually associated with life. Don't take me wrong, the reproduction of prions is an amazing and previously unexpected phenomenon, but that doesn't mean they are alive in any way.

Viruses are also not generally considered alive, as they don't fulfill all of the common criteria for live. The exact definition of life is more of a debate, you could certainly argue that viruses are alive in some way, but that is not a universally accepted claim in any way.

Setting aside the issue of whether prions are considered "alive" (which is as much about English definitions as any facts), there is the question of whether they came from RNA/DNA.

In ScienceDaily, they reported about a study that looked at the evolutionary origins.

"The prion protein was discovered over twenty years ago and has been studied intensively. Nobody, however, knew its evolutionary origin and much confusion surrounds its physiological function," says Prof. Schmitt-Ulms. The team's analysis suggests that the prion gene is descended from the more ancient ZIP family of metal ion transporters. Members of the ZIP protein family are well known for their ability to transport zinc and other metals across cell membranes.

Although no single evidence firmly established the phylogenetic relationship between ZIP and prion genes, Schmitt-Ulms is confident that the many corroborating pieces of evidence collected and, equally important, the absence of any conflicting observations, allow no other conclusion to be drawn.

Not the answer you're looking for? Browse other questions tagged biology evolution .

9
Is a short-term fast beneficial for maintaining good health and extending life expectancy?