Are annual contributions to carbon in the atmosphere due to human activities increasing by 6% per annum?

I recently began reading the 2014 book, The Sixth Extinction: An Unnatural History by Elizabeth Kolbert.

When speaking about the amount of carbon that is added to the atmosphere by human activities (e.g. burning fossil fuels and deforestation), she writes:

Since the start of the industrial revolution, humans have burned through enough fossil fuels - coal, oil and natural gas - to add some 365 billion metric tons of carbon to the atmosphere. Deforestation has contributed another 180 billion tons. Each year, we throw up another nine billion tons or so, an amount that's been increasing by as much as six percent annually.

According to TRENDS IN GLOBAL CO2 EMISSIONS 2014 Report

Global carbon dioxide (CO2) emissions from fossil fuel combustion and from industrial processes (cement and metal production) increased in 2013 to the new record of 35.3 billion tonnes (Gt) CO2, which is 0.7 Gt higher than last year’s record. This moderate increase of 2% in 2013 compared to 2012 is a continuation of last year’s trend and of the slowdown in the annual emissions growth. The actual increase of 2012 compared to 2011 was 0.6 Gt or 1.7% (excluding leap year correction) and both are about half the average annual growth rate of 1.1 Gt or 3.8% since 2003 (excluding the 2008–2009 recession years). Note that the average annual emission increase in the 1995–2002 period (after the large decline in energy consumption in the former Soviet Union countries) was about 1.2% or 0.4 Gt CO2 per year. With the global economic growth of 3.4% and 3.1%, in 2012 and 2013 respectively, a further decoupling of the global economic and emission trends can be observed. This decoupling is consistent with the increasing service sector share (growing by 1.5% and 1.8% in 2012 and 2013 on average in middle income countries, including China) to the overall gross domestic product, at the expense of more energy-intensive industrial activities. 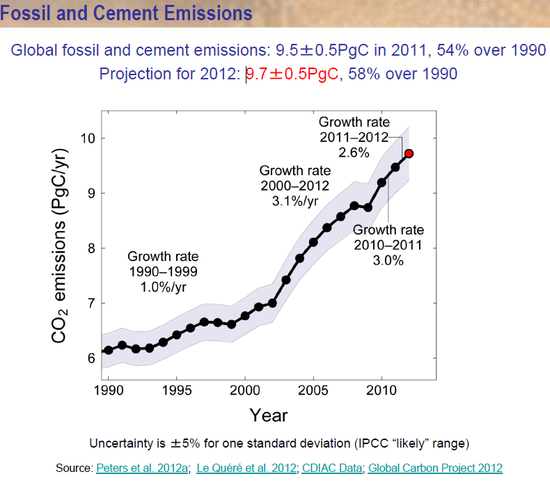 So 6% rate of growth is not representative of what is happening currently.

However, according to Figure 4.1 of Reducing CO2 Emissions: A Comparative Input-Output-Study for Germany and the UK, world CO2 emissions reached a peak year over year percent increase of about 5.5 in 1967. So if you look at her exact wording, "since the start of the industrial revolution...as much as six percent annually", what she is saying might confuse some, but it is true.

If you are interested in atmospheric measurements of carbon dioxide (both recent and historically for the last 800,000 years), check the Earth System Research Laboratory web page at http://www.esrl.noaa.gov/gmd/ccgg/trends/

If you click on “CO2 Movie”, they have a video animation of the atmosphere’s carbon dioxide content for the last 800,000 years. The video should remove all doubt as to the “human contribution”.