Can magnetic resonance through TV and cell phones control your mind and emotions? 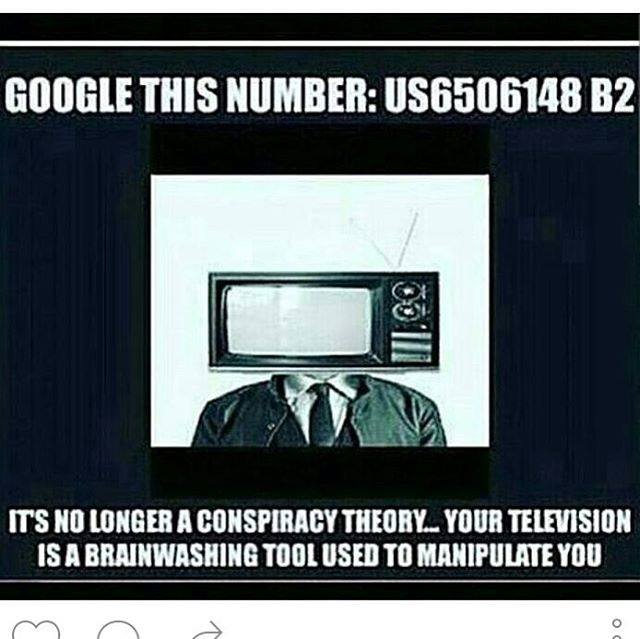 GOOGLE THIS NUMBER: US6506148 B2 IT'S NO LONGER A CONSPIRACY THEORY... YOUR TELEVISION IS BRAINWASHING TOOL USED TO MANIPULATE YOU.

I assume they want the google patent to show up when you Google for US6506148 B2. That patent for US6506148 B2 reads "Nervous system manipulation by electromagnetic fields from monitors".

Further you can find this claim and reference to this patent repeated by Alex Jones. In this video, Alex Jones says

Alex Jones goes on to say,

"They are also getting ready to deploy towers that put off a magnetic resonance that will calm people during emergencies."

There's a bunch of claims and half-truths combined with some misapplied truths.

First: Yes, electromagnetic waves can influence the nervous system. There are, for example, highly experimental treatments of Parkinson's and Tourette's using little electric pulse-givers embedded into the brain: http://www.parkinson.org/understanding-parkinsons/treatment/surgery-treatment-options/Deep-Brain-Stimulation

That article has a lot of good examples for how EM radiation can affect the brain. From that article:

Magnetic resonance imaging (MRI) of the living brain uses an externally imposed magnetic field. Preliminary findings suggest that bipolar-disorder patients moods improve immediately after they undergo a specific MRI procedure. It is possible that this effect works in a way similar to that of TMS on symptoms of depression, but further investigation is warranted.

However, the magnetic fields in an MRI device are incredibly high compared to what your TV, microwave, cellphone can put out. That's why you have to remove all metal prior to having an MRI scan done.

EM radiation can "mess" with your brain though: http://www.scientificamerican.com/article/mind-control-by-cell/

"The significance of the research," he explained, is that although the cell phone power is low, "electromagnetic radiation can nevertheless have an effect on mental behavior when transmitting at the proper frequency." He finds this fact especially remarkable when considering that everyone is surrounded by electromagnetic clutter radiating from all kinds of electronic devices in our modern world. Cell phones in talk mode seem to be particularly well-tuned to frequencies that affect brainwave activity.

But in terms of mind control, the patent does not do anything to support a claim regarding whether or not they can make you do what they want, or feel what they want. If it was indeed possible, then googling for "electromagnetic mind control" should turn up some research papers and not just a bunch of New World Order 911 blogs.

Emotions are way more complicated than "resonances" of "brain circuits". There's a bunch of other stuff going on as well. Hormones play a big role, for example.

Finally: Different TVs will have different electromagnetic signatures, and it'd be next to impossible to get the correct output on all devices embedded in the TV signal. And that's not even accounting for the fact that modern TVs have a much lower EM radiation footprints.

So in conclusion: The patent claims something that it can't deliver on. It's pretty old by now, so we should have been able to see it come to fruition if it would actually work. I mean, if there's a patent, that means the way it works is out in the open. Nothing would stop anyone from building and using such a thing. It combines the correct claim that in-brain EM stimulation can alter behaviour with the correct claim that cell phones and TVs give off EM radiation to arrive at the false claim that you can use the EM radiation from TV or cell phone to alter someone's emotions.

Not the answer you're looking for? Browse other questions tagged electromagnetism emotions mind-control .

4
Can certain broadcast frequencies be used for mind control?