Have only 5% of U.S. inmates received a trial?

According to this article, 95% of inmates in the U.S. have never received a trial, choosing a plea bargain to avoid potentially punitive sentencing if found guilty.

The reality is that almost no one who is imprisoned in America has gotten a trial,” explains award-winning journalist, Chris Hedges, in a recent Truthdig column. “There is rarely an impartial investigation. A staggering 97 percent of all federal cases and 95 percent of all state felony cases are resolved through plea bargaining.” Of those millions who bargained away their right to a trial by accepting plea deals, “significant percentages of them are innocent.”

Is this true? Have any reliable studies been performed to validate this number?

The Bureau of Justice Statistics(part of the Department of Justice) publishes tables of felony convictions by type of conviction. Here is one such report from 2002, which shows that about 5% of incarcerated felons in prison that year received a trial. (Source: BJS, State Court Sentencing of Convicted Felons) 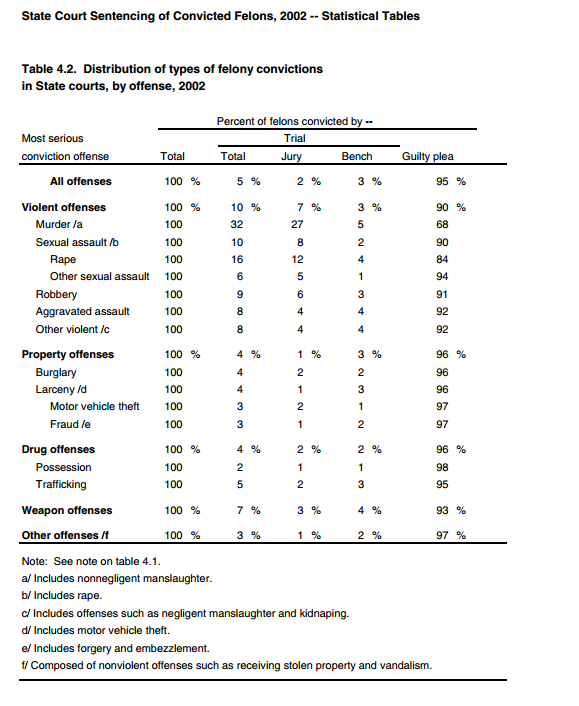 A slightly more comprehensive article about plea bargaining, released by the Bureau of Justice Assistance (also part of DoJ) explains more about the process. They also cite some academic literature. I didn't review the academic article cited, but BJA claims that their results show a similar result (that 90-95% of inmates pled guilty) (Source: BJA, Plea and Charge Bargaining).

This article covers the ground well. We have no real estimates of the number of innocent people who plead guilty, because part of the bargain is that you never subsequently say "I was really innocent but I took a plea because....". However there is little doubt that the number is significant. The key points are:

16
Did the U.S. government have prior knowledge of 9/11?
44
Does the U.S. President have a red phone?
7
Have more people been killed in Chicago than U.S. troops in Afghanistan?
24
Have Iceland's police only ever shot one person dead?
20
Have prior U.S. Presidents used executive actions to change immigration policy
29
Have more U.S. senators been arrested for sexual misconduct in bathrooms than trans women?
6
Do 5 percent of cancer patients in the U.S. end up in a clinical trial?
13
Have the Clintons received $153 million in speaker fees?
15
Are 30% of U.S. prisoners deaf or hard of hearing?