Were the Ten Commandments taken from the Egyptian Book of the Dead?

This meme image from Pinterest suggests the Old Testament's Ten Commandments were derived from the Egyptian Book of the Dead. 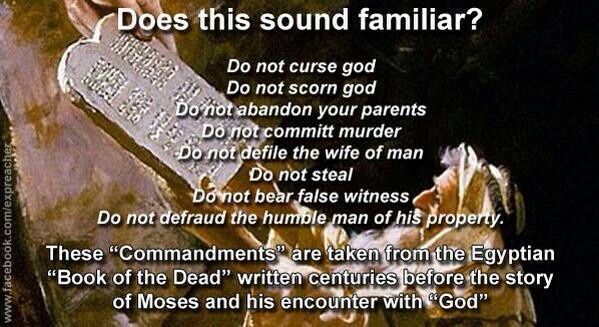 Does this sound familiar?

Do not curse god
Do not scorn god
Do not abandon your parents
Do not defile the wife of a man
Do not steal
Do not bear false witness
Do not defraud the humble man of his property.

This is one of many examples of the claim. Is the Negative Confession in the Egyptian Book of the Dead the source for seven of the ten mosaic commandments?

Grabbing the following conclusions from Jared C. Hood, "The Decalogue and the Egyptian Book of the Dead", Australian Journal of Jewish Studies, Vol. 23 (2009).

Does it take literary dependence for two cultures to arrive at similar statements regarding something as fundamental as the injustice of murder? Leaving aside thoughts of the evolution of morality, what parents in the history of humanity have not said to their child, “Do not do it,” or “Do what I say”?

From that emerges what is probably one of the major differences between the two documents. Both have the concern of self-interest—the concept of blessing upon obedience and a curse upon disobedience—and both have a theocentric focus, with the idea of pleasing God/the gods (in the protestations of the second recitation, the claim is that “I have done what people say and that on account of which the gods are pleased”). The Egyptian text, though, is more focused on magic and merit (or having maintained order or balance), whilst the situation with the Israelite text is more complicated. The Decalogue comes to a people who have already been redeemed. The justice of God is preceded by the covenant love of God. The Spell is concerned to find a way for “absolution” for sin, whereas the Decalogue is to be kept from the security of being in a special relationship with the Lord. In fact, the overall tenor of the relationship between the individual and the deity in Egyptian and Israelite religion is different, since in the latter, all are priests of God and are in a Father-son relationship (the democratising of religion, as it has been put).

Short version: What the two documents share is basically being a list of bad things, which is hardly a brilliant and unique creative product. What is unique and innovative to the Bible is that the Ten Commandments come as an explanation of part of a covenant by which an entire tribe has been divinely selected. The Egyptian text doesn't have this at all, being part of a magic spell for the individual.

The 42 "negative confessions" or "declarations of purity" were made by the deceased soul in order to gain eternal life. They were a list of the sins not committed during life, and hence can be taken as an effective list of commandments. The list has a lot of redundancy because the declarations were made to various different gods, so (I guess) theft of grain, theft of land and theft of other possessions were under the purview of different gods. If you eliminate the minor variations and the multiple gods you arrive at those 7 commandments you listed.

However this is not proof that Moses cribbed the Commandments from his upbringing in Egypt. Rules about property, killing and sex are probably necessary for any civilization, so it is hardly surprising that both the Egyptians and the Israelites had similar rules. This means it is still possible that God handed Moses an ideal set of divine rules that the Egyptians had previously approximated by trial and error. In this context its important to note that both sets of rules forbid theft, murder and adultery, but don't define them. It might well be that under specific circumstances killing or appropriation of property or women would be legal (and therefore not sinful) in one culture but not in the other. Also there are some interesting items in the Egyptian list that are not in the Decalogue: the Egyptians banned anger (19, 25, 38), remorse (13), refusing to listen to "truth" (26) and being nosy (17, 31). None of those are found in the Decalogue (although they may be found elsewhere in Mosaic law; I don't know).

19
Was the Vatican bailed out from bankruptcy by private interests in the 1980s?
41
Did Harold Camping profit from his false prediction that the world would end?
26
Do the majority of Americans take the Noah's ark story from the Bible literally?
3
Were the Jews the first to believe in monotheism?
9
Did Martin Luther refer to physicians who assume diseases come from natural causes as "ignorant blockheads" (or the German equivalent)?
1
Does Liberation Theology have its roots from the KGB and the Soviet Union?
3
Is this picture from the flooded cave rescue in Thailand?