Is it illegal to leave your house without underwear in Thailand?

There are some other strange laws in Thailand but this seemed to be the most "interesting" one to me. How are they even going to find out? Are they going to observe your bulge?

There are a lot of sources you can find where this law is mentioned:

It’s against the law to leave your house in Thailand if you’re not wearing underwear.

Strange Thailand Law #1: The Underwear Law
Hey, who are we to judge, but technically it is illegal to leave your house in Thailand if you are not wearing underwear.

It’s illegal to leave the house without your underwear on.

It is even asked in Quora but there aren't any details about the official law in the answer given; on the other hand, the user talks about his experience: Is not wearing underwear illegal in Thailand?, Quora

(Maybe, the law pertains to the citizens only.)

Is this true? Is it possible to find the official law?

No, I've searched the English language translation of the Thai Penal Code.

The closest current law is:

Section 388 Whoever, doing any shameful act in public by indecently exposing oneself's person, or by committing the other indecent act, shall be fined not out of five hundred Baht.

In fact, two woman were recently fined the 500 Baht for being topless in public.

This idea may have derived from an older law, that banned only wearing underwear.

On 15 January 1941, it was decreed that "Thais should not appear in public, populous places, or municipal areas without proper clothing". See Thailand in the Cold War at pages 62-63.

Thai people should not appear at public gatherings, in public places, or in city limits without being appropriately dressed. Inappropriate dress includes wearing only underpants, wearing no shirt, or wearing a wraparound cloth.

Leaving the house in just underwear was specifically stated to be illegal. 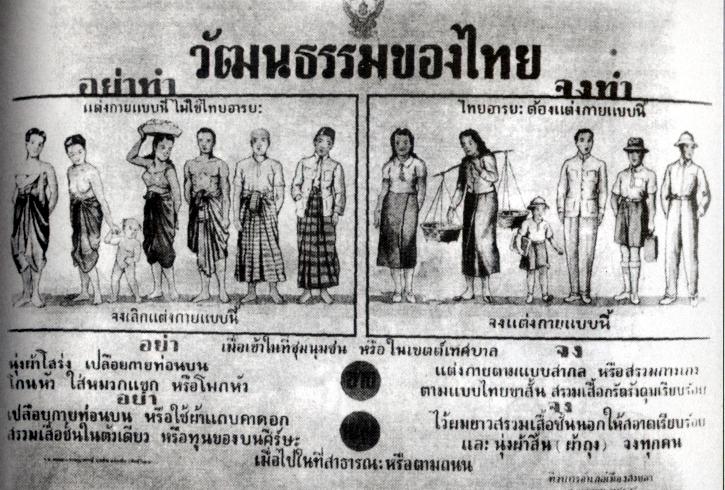 (above, improper dress is depicted on the left, which shows two people without underwear, a topless woman and naked child, proper dress on the right)

However, "decrees regulating dress and behavior were repealed" according to Fall of the Phibun Government, 1944 at page 117

21
Is it illegal in any U.S. jurisdiction to be in neutral at a red light?
38
Is refusing to decrypt data for the police illegal in England and Wales?
40
Is it against the law to mispronounce Arkansas?
33
Is one guilty until proven innocent in the Mexican legal system?
13
Is it illegal for pharmacists to tell their patients that their drugs are cheaper than their co-pay if they pay cash without using their insurance?
17
Did a senior U.S. Justice Department official state that 3- and 4-year-olds can learn immigration law well enough to represent themselves in court?