According to the BBC, the UK government claims:

22% of Muslim women living in England speak little or no English.

It also quotes a former Superintendent of the Metro Police as disputing this figure:

Mr Babu also said he did not recognise the figure of 22% as the proportion of Muslim women without good English - instead quoting a figure of 6%, cited by racial equality think tank the Runnymede Trust.

The 22% seems like an exceptionally high number; is this accurate?

No but census data is somewhat consistent with the notion that around 22% of Muslim women, born outside the UK, report themselves, or are reported, to the census as "cannot speak English well".

The census figures relate, not to Muslim women as such but to UK women born in Pakistan and Bangladesh. The Muslim Council of Britain seems to consider that the latter is representative of the former.

Consider this: new figures show that some 190,000 British Muslim women – or 22 per cent – speak little or no English despite many having lived here for decades. 40,000 of these women speak no English at all. So it’s no surprise that sixty per cent of women of a Pakistani or Bangladeshi heritage are economically inactive.

Politicians of all hues often make simplified statements about complex matters and choose numbers that suit their political agendas. The numbers may be real but, by themselves, may not give a complete, balanced or accurate view of the subject.

There are figures, from the UK Census 2011 that seem supportive of the government's assertion.

Other figures seem to contradict the assertion.

It may depend on exactly how you define "little or no English", "Muslim" and "struggling with English". For example does struggling mean only those actively seeking to learn in a formal organised setting and experiencing some difficulty?

It also depends on how representative of UK Muslims are immigrants to the UK from Pakistan and Bangladesh. 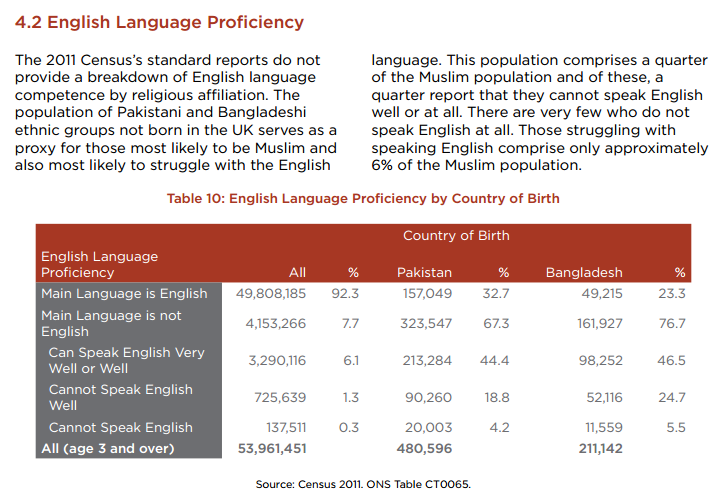 Note that the MCB advance the idea that these national groups may be an indicator for muslims in the UK. The figures for "cannot speak English well" are 18.8% and 24.7%. It seems conceivable that the government's figure of 22% may be some kind of weighted average of these or of similar or overlapping data.

The MCB also published an Infographic that contains this 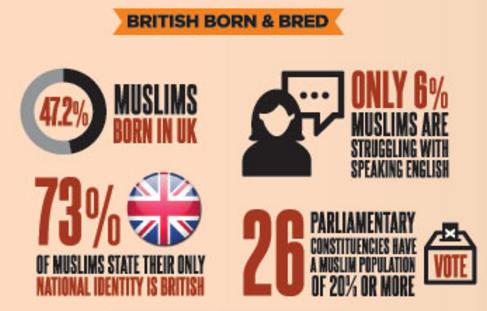 We don't know if the 6% includes or excludes Muslims who speak no English and make no attempt to learn English - The census figures don't tell us if if there are any UK Muslims at all who are content not to speak English and are therefore not "struggling".

In the, perhaps unlikely, event that the 6% are all women, not men and are all foreign-born, not UK-born; the 6% would then be 24% of foreign-born Muslim women in the UK.

A book "Muslims on the Map: A National Survey of Social Trends in Britain" By Serena Hussain in 2008 gives the following on page 121:

This seems to have been drawn from sources including the 2001 census.

Not the answer you're looking for? Browse other questions tagged united-kingdom language islam .

48
Are there 20,000 English words in the average adult's vocabulary?
4
Does knowing Latin help learning English?
21
Did Reverend Mezzofanti fluently speak thirty-four languages?
19
Is the "I before E" English spelling rule wrong more than it is right?
4
Is 15 percent of the U.S. prison population Muslim?
5
Is Melania Trump barely able to speak English?
1
Did Muslim women lose property rights during the British colonial rule in India?
5
Was Tommy Robinson transferred to a prison with a 71% Muslim population?
18
Was "their" a singular pronoun in English before the 16th century?