Do loopholes in the Great Wall face the China side?

There is a pseudoscientific theory popularized by Russian authors Fomenko and Nosovsky which, among other things, claims that the Great Wall of China had been built by peoples living to the north of it who were more advanced than the Chinese at the time, and, therefore, its goal was to protect the North from the Southern barbarians (the Chinese), not the other way around.

As a proof of that claim they mention that the loopholes on the Great Wall face the Chinese side.

I don't in any way support that theory but is that very fact (loopholes facing the Chinese side) true? And if yes, as a side question, why is it so?

The Ming period Great Wall, which is the impressive one that tourists visit, generally has battlements on the north side, and parapets on the other so that the guards don't fall off. At Mutianyu, indeed, there are loopholes on both sides. However, even at Mutianyu, the crenels are often only on the north side, as you can see in this photo: 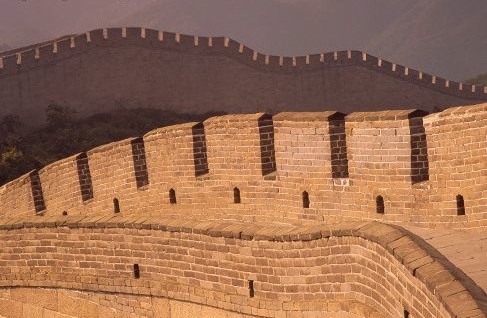 Tourist websites seem to assume that this is just in case the enemy got to the other side. There are also west-facing loopholes, in case the invader got on top of the wall.

Why would the north build crenels on its own side? Also, for this to work as "defending the north from the south", you'd have to fake quite a lot of history -- like, most pre-modern Chinese texts. That would have been a lot of work for the fabrication industry!

Not the answer you're looking for? Browse other questions tagged history military china .

12
Did Marco Polo travel to China?
16
Are these “mystical caves” in China antique, or modern?
8
Was Mao's Great Leap Forward responsible for 30 million deaths?
6
Did China plant 66 billion trees since 2003?
8
Did spaghetti originate in China?
13
Did Pakistan supply an F-16 fighter jet to China for reverse engineering?
85
Was the wheel invented before the wall?
8
Is the Great Wall of China visible from space?
1
Did China steal technology from the USA to make their J-20?
5
Will China soon have a bigger navy than the USA?