Will a mere touch kill a butterfly?

I've heard many times that touching a butterfly will remove some "special" powder from its wings preventing it to ever fly again, effectively killing it or condemning it to die of starvation.

Example on a blog:

When you touch a butterfly, you get dust on your hands. Ever wondered what it really is? I did, but never thought this much about it before. Butterflies and moths belonging to the genus Lepidoptera, meaning scale-wing, are named referring to the scale cell structures on its wings. [...]

Butterfly wings will not be structurally sound and strong if you remove a bunch of them, thus harming the small insect. This[sic] ridges of our fingerprint or oil on our skin is more than enough to pry these wing scales loose, even with the slightest (caring) touch. The dust that comes off, when you touch a butterfly is its wing scales. Be careful next time you wish to touch it! You could endanger it’s[sic] life without meaning to harm it. 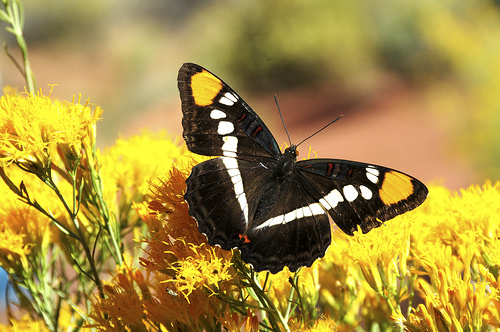 Poor butterflies! We should never ever touch them, right? Or is it a cute myth?

Butterflies won't necessarily die if you touch their wings and dislodge some scales.

How stuff works has this

While you don't want to manhandle the beautiful creatures, knowledgeable researchers have been trapping and tagging butterflies for years to track their whereabouts. These scientists and volunteers use nets to corral the flying insects, then gently scrape enough scales from a small area to expose the wing's clear membrane ... Not only do butterflies survive these seemingly traumatic encounters, but they've also been known to fly away from bird attacks and yes, even rainstorms, unscathed. Some have even flown away after having a small portion of their wing torn off

Of course, the wings are fragile and the scales do serve a purpose. So it's better not to pick butterflies up by the wing if you don't have a good reason to.

The scales are not used in flight, but those scales are important for other things. However, the same article points out that the wings are very fragile, and are easily broken (which would doom the butterfly).

Do not touch or grab the butterflies. They’re quite fragile and their wings are easily damaged.

Don't touch a butterfly's wing—the "powder" that rubs off is actually the scales.

Not the answer you're looking for? Browse other questions tagged mortality entomology .

25
Will cats eat their deceased owner, but dogs will starve to death instead?
21
Will a worm, cut in half, survive as two worms?
8
Does smoking cannabis kill 30,000 people per year?
84
Are female surgeons less likely to kill you?
10
Does tobacco kill half of its consumers?
8
Is there a species of locust-eating wasp that will check its burrow repeatedly if its food is moved?
54
Will there be millions of cicadas per acre when Brood X emerges this year?