Is the moon artificial?

I have some friends claiming that the moon is an artificial satellite, put in place recently. (I've already read the Is the moon young? question.)

Apart from the age, the usual "evidence" given by YouTube videos and sites includes:

Has this "evidence" been debunked? Is the Moon an artificial spaceship?

A couple of articles they refer to:

This slide from a University of Tennessee astronomy course discusses five "serious" theories of the moon's formation, and concludes:

At present the fifth hypothesis, that the Moon was formed from a ring of matter ejected by collision of a large object with the Earth, is the favored hypothesis; however, the question is not completely settled and many details remain to the accounted for.

In particular, it dismisses some of the other theories as conflicting with evidence collected from the moon:

A detailed comparison of the properties of Lunar and Earth rock samples has placed very strong constraints on the possible validity of these hypotheses. For example, if the Moon came from material that once made up the Earth, then Lunar and Terrestrial rocks should be much more similar in composition than if the Moon was formed somewhere else and only later was captured by the Earth.

These analyses indicate that the abundances of elements in Lunar and Terrestrial material are sufficiently different to make it unlikely that the Moon formed directly from the Earth.

Such a conclusion would also eliminate the conjecture posed in the question.

In addition to @hadriens good answer (+1):

(ii) The moon is not perfectly round, its polar radius is 1736.0 km, but its equitiorial radius is about 1738.1km. It is more closely spherical than the Earth, but that isn't surprising as its rotational period is about 27 days, which is much slower than that of the Earth, so the centrifugal force is lower (although so is the gravitational force, which would make it easier for the moon to become more oblate). The flattening of the Earth is 0.0033528 and that of the moon is 0.0012, so the Earth is three times more oblate than the moon, but then again it is spinning nearly thirty times faster.

(iii) Apparently, some very large craters have convex floors, simply because the convexity follows the curvature of the moon, so unless some clarification is provided, this argument may simply be a misunderstanding.

(iv) This is a non-sequitur from (i) to (iii) as none of those actually imply that the moon is necessarily hollow or artificial. (i) and (ii) are very weak arguments, as very basic fact checking shows that there is nothing unduly suprising in either of these "facts".

Note, I am treating "put in place" as different from say "destroyed and replaced". It implies there was previously nothing similar in orbit about the Earth. 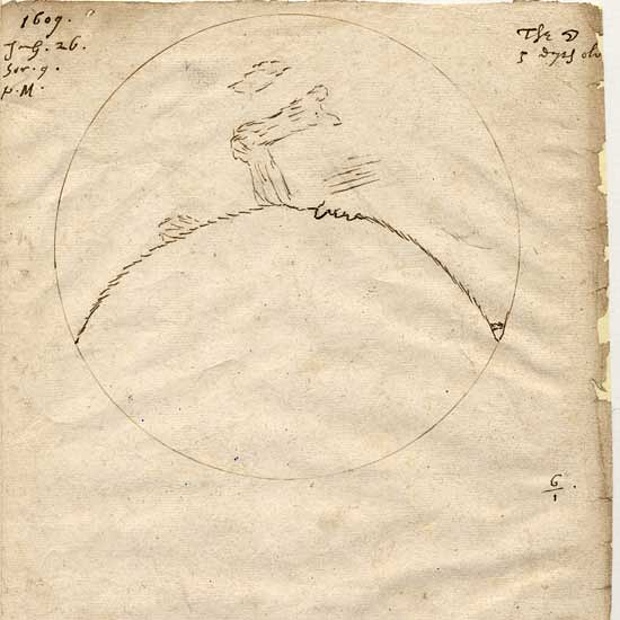 1609 is not recent (using the word as might be expected by the general public).

Also there are very old records of observations of the moon

Around 400BC, Aristotle deduced that the Earth was round from the shape of the Eath's shadow on the Moon during a lunar eclipse.

About 200BC, Hipparcos carried out a calculation of the dimensions of the Earth-Moon system.

There is evidence of lunar observations many thousands of years BCE.

It is probable that there were two major megalithic lunar observatories ain the Carnac area.

227
Has man walked on the Moon?
17
What is the reason that the moon appears larger on the horizon?
30
Is the Moon young?
13
Is wood harvested during a full moon ("moon wood") better for musical instruments?
4
Does the phase of the Moon affect human sleep patterns?
8
Did an Indian king claim to witness the moon split?
126
Did US flags on the moon turn white?