Is the runner's high a real phenomenon? 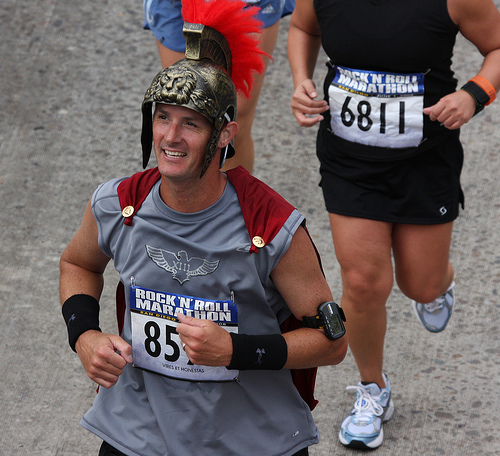 The claim is as follows:

A publicized effect of endorphin production is the so-called "runner's high", which is said to occur when strenuous exercise takes a person over a threshold that activates endorphin production. Endorphins are released during long, continuous workouts, when the level of intensity is between moderate and high, and breathing is difficult. This also corresponds with the time that muscles use up their stored glycogen. During a release of endorphins the person may be exposed to bodily harm from strenuous bodily functions after going past his or her body's physical limit. This means that runners can keep running despite pain, continuously surpassing what they once considered to be their limit.[citation needed]

physiology sport
Share
Improve this question
edited May 27 '11 at 5:28

Yes, runner's high has been proven to exist. This happened just a few years ago, in an article published in the publication Cerebral Cortex called The Runner’s High: Opioidergic Mechanisms in the Human Brain in February 2008. The publication is owned by the Oxford University Press.

This is still relatively new science, but according to this article in the New York Times, leading endorphin researchers are on board with the findings stated in the study.

The researchers involved tested 10 runners pre-run, and 2 hours into the run using PET scans. They did not determine whether or not runner's high could be achieved in a shorter duration of exercise. According to this WikiHow answer, runner's high can be achieved in 30-45 minutes, but there is some debate on the validity of some of WikiHow's articles.

Not the answer you're looking for? Browse other questions tagged physiology sport .

4
Does eating chocolate make you high?
18
Is WWE (Wrestling) Fake or Real?
2
Was the number of injuries happening to the Madden cover players unusually high?
11
Is the 100m winner the “fastest man”?
18
Are women more sensitive to high-pitched noises than men?
14
Did more than 660 High-School students die as a direct result of Football injuries?
21
Is umami a real flavor, or a marketing strategy?
7
Is this 10 pack real?