Was the term "conspiracy theorist" made popular by the CIA?

I have seen the following infographic on facebook recently. 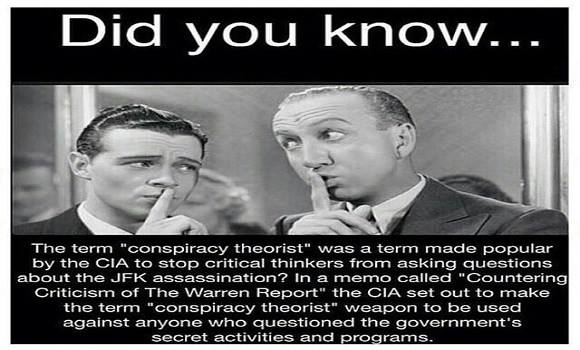 Did you know... The term "conspiracy theorist" was a term made popular by the CIA to stop critical thinkers from asking questions about the JFK assassination? In a memo called "Countering Criticism of The Warren Report" the CIA set out to make the term "Conspiracy theorist" [a] weapon to be used against anyone who questioned the government's secret activities and programs.

I see a few notable claims there:

Interestingly, this timeline from the Google Ngram Viewer seems to coincide with claim 2, showing an increase in use of the term around the 1960's.

Did the CIA popularize the term "conspiracy theory"? Is there evidence that it was used to stifle questioning about the Kennedy assassination? Is there such a memo called "Countering Criticism of The Warren Report" that endeavors to 'weaponize' the term?

This claim is supposedly grounded in an academic source: Lance deHaven-Smith’s 2013 book Conspiracy Theory in America. But here's the funny part: the conspiracy theorists are misreading a history book to look for a conspiracy.

First, let's look at the meme's claim. The CIA's "Dispatch 1035-960" was attempting to respond to the conspiracy theory of JFK's assassination. According to globalresearch.ca, which claims (incorrectly) to be summarizing the thesis of deHaven-Smith’s book, they recommended tactics like this:

The memorandum lays out a detailed series of actions and techniques for “countering and discrediting the claims of the conspiracy theorists, so as to inhibit the circulation of such claims in other countries.” For example, approaching “friendly elite contacts (especially politicians and editors)” to remind them of the Warren Commission’s integrity and soundness should be prioritized. “[T]he charges of the critics are without serious foundation,” the document reads, and “further speculative discussion only plays in to the hands of the [Communist] opposition.”

Sounds pretty serious! And pretty conspiratorial against the theorists! Well, only if you ignore the fact that the concept of a "conspiracy theory" was already current at the time.

The Skeptical Inquirer responded to the meme with a column, "Nope, It Was Always Already Wrong". As the author, Robert Blaskiewicz, notes:

Blaskiewicz's counterargument is a good example of Google Books making us more confused rather than less. Blaskiewicz simply cites a bunch of examples of the two words being put together before the 1960s. But that doesn't help us understand how some points of view became labeled as "conspiratorial," and why that developed in the 20th century into a thesis about how conspiracies don't generally happen.

Now, let's see where "conspiracy theory" actually came from. DeHaven-Smith's actual thesis is grounded in the language employed by two intellectuals of the time, Karl Popper and Richard Hofstadter, and especially the latter. Without even reading the book, one English.SE elder wrote in with agreement:

The phrase 'conspiracy theory' was current in legal and historical discourse well before the 1940s, but usually with reference to a particular legal point or historical question. The 'conspiracy theory' of strikes, for instance, was the legal theory that labor unions constituted a 'conspiracy in restraint of trade'; the 'conspiracy theory' referred to in Barrie England's quotation from the OED is the theory that the Kansas-Nebraska Act, which effectively nullified the Missouri Compromise, was engineered by a cabal of Missouri politicians to destroy the political influence of Senator Thomas Hart Benton. Charles Beard's claim that the 14th Amendment had been 'rigged' to grant unprecedented rights to corporations came to be known in the history biz as "The Conspiracy Theory of the 14th Amendment.

I think it's pretty clear from A. Brooks' NGram that Popper's The Open Society and Its Enemies (1945), which was very widely read in my generation, kicked off discussion of the "conspiracy theory of society". But Popper was writing about historiographers; the widespread notion that conspiracy theories are particularly characteristic of unlettered radicals seems to have been largely the work of historian Richard Hofstadter in The Age of Reform, a 1955 study of Populism, and "The Paranoid Style in American Politics" (1964). Hofstadter scarcely needed CIA support.

And from another answer on the same page, here's what Popper was saying:

OED’s second definition comes before 1964 and is also negative. It comes from Karl Popper, writing about the “conspiracy theory” of history, which he associates with people deluded into thinking they can make “heaven on earth” and need to counter (imagined) conspiracies with their own.

This sounds like a liberal democrat reading the Communist Manifesto, and I suspect this is not a coincidence.

I have not read Lance deHaven-Smith's book either, but given this material, it seems like he would have a lot of content to work with. I cannot find reviews of the book on Google Scholar, but I find considerable evidence that deHaven-Smith is a responsible scholar and not a crackpot himself.

Here is a review by a conspiracy theorist; I doubt it captures the full intellectual range of the book, but it does show some of the historical ground it covers.

In any case, I think the evidence of deHaven-Smith's book and the English.SE contributors show that the concept of "conspiracy theory" was made popular by Popper, Hofstadter, and several other widely read intellectuals of the Cold War era. The CIA didn't have to come up with a brand new way to discredit theories; simply marking something as a "conspiracy theory" was already in agreement with the Cold War intellectual climate. If you believe that Occam's Razor and democracy produce happier societies than global revolution against the reptilian elite, then you don't need the encouragement of a CIA memo to denounce conspiracy theories.

The CIA repeated the concept, but were their agents able to "popularize" it? Who could possibly know that? This meme's claim is not provable, and in any case wrongheaded. It desires to give us absurdly simplistic evidence for a worldwide conspiracy against conspiracy theories, and in the process of doing so ignores all the intellectual questions about how we perceive that something is a conspiracy theory. After all, even if it's the CIA telling us something, we're the ones who choose to listen.

2
Is the derogatory meaning of the term "conspiracy theory" something that was specifically promoted by the CIA?

23
Was there a large, illegal CIA project called "MKULTRA"?
52
Did the CIA sell drugs in the US?
15
Is the phrase "Al Qaeda" a made up term?
43
Does the owner of the Washington Post have a deal with the CIA worth 600 million dollars?
9
Did the CIA conclude that Uri Geller had psychic powers?
54
Did the CIA blow up a Siberian pipeline in 1982?
6
Did a former CIA accountant testify that Lee Harvey Oswald was a CIA employee?