How could Darwin be sure all life has a common origin

I don't recall exactly the words he used, but to the best of my recollection Darwin was quite certain that all living things share a common ancestor.

First of all, is this correct?

Second, and more important, was there a "killer argument" available to Darwin for believing in a single common ancestor? Why might he not have supposed, for example, that life arose once and evolved into plants, and again giving rise to animals. Or once for mammals, once for birds, once for fish, etc.?

LATER - I'm still not clear on the reasons for getting downvoted, but just to clarify. There's disagreement over whether Darwin actually believed life started once only, as opposed to anywhere between twice and ten times, but that (possible) minor mistake on his part wasn't really my point. Suppose for the sake of argument that he did get it 'right'.

I'm interested in the possibility that there might have been knowledge and evidence available to Darwin that he just happened not to be aware of, or things he knew but didn't recognise as relevant. It's commonplace today to say we know evolution is true because the DNA record is irrefutable. But that wasn't available to Darwin.

To add to Konrad Rudolph's partially correct answer, let's talk about this more. The quote you are looking for may be:

"Analogy would lead me one step further, namely, to the belief that all animals and plants have descended from some one prototype. But analogy may be a deceitful guide. Nevertheless all living things have much in common, in their chemical composition, their germinal vesicles, their cellular structure, and their laws of growth and reproduction. We see this even in so trifling a circumstance as that the same poison often similarly affects plants and animals; or that the poison secreted by the gall-fly produces monstrous growths on the wild rose or oak-tree. Therefore I should infer from analogy that probably all the organic beings which have ever lived on this earth have descended from some one primordial form, into which life was first breathed." (1)

Same page as Konrad's quote. Keep in mind that writing in the 1800s was different in style than today. Quite often an author will say something contradictory to their position, before getting to their point (Like Darwin did on the complexity of the eye example that creationists commonly refer to). Because, just before that, he says:

Therefore I cannot doubt that the theory of descent with modification embraces all the members of the same class. I believe that animals have descended from at most only four or five progenitors, and plants from an equal or lesser number.

You can read the full text of Chapter 14 of his book here: http://www.talkorigins.org/faqs/origin/chapter14.html

However, to address the second part of your question, this quote came at the end of his book. it was based on the complete body of his work, not just one "killer argument". There is no such thing. A subject as vast, complex, and diverse as biology will never have a single killer argument. To look for one would be a fool's errand, and to believe one would be the mark of a fool. A singular killer argument is the sign of a simple question. Something evolution most decidedly is not.

The fact that pretty much every discovery in Biology (especially genetics) has supported his argument should lend credence to Darwin being right. There is no way a Victorian era gentleman would know about DNA to the level we do now, and yet he was so amazingly right about the things he wrote.

Again, he posits that perhaps plants, animals, and things that just appear too different from each other to be related may have had their own start, but then his final argument most likely lays in his inference reached by his body of work, and deduction. And keep in mind, given what knowledge was available to him in his time, his deduction was the best he could go with. All the supporting evidence came long after his death.

Now it CAN be argued that Charles Darwin was not the first to think of this. Thus his final inference may have been built upon not only the totality of his own work, but the previous thoughts of other individuals. His own grandfather Erasmus once posited in 1795:

[W]ould it be too bold to imagine, that in the great length of time, since the earth began to exist, perhaps millions of ages before the commencement of the history of mankind, would it be too bold to imagine, that all warm-blooded animals have arisen from one living filament, which the great First Cause endued with animality, with the power of acquiring new parts attended with new propensities, directed by irritations, sensations, volitions, and associations; and thus possessing the faculty of continuing to improve by its own inherent activity, and of delivering down those improvements by generation to its posterity, world without end?

And if you go further back, in the 1740s Pierre-Louis Moreau de Maupertuis suggested common descent in Essai de Cosmologie

Could one not say that, in the fortuitous combinations of the productions of nature, as there must be some characterized by a certain relation of fitness which are able to subsist, it is not to be wondered at that this fitness is present in all the species that are currently in existence? Chance, one would say, produced an innumerable multitude of individuals; a small number found themselves constructed in such a manner that the parts of the animal were able to satisfy its needs; in another infinitely greater number, there was neither fitness nor order: all of these latter have perished. Animals lacking a mouth could not live; others lacking reproductive organs could not perpetuate themselves ... The species we see today are but the smallest part of what blind destiny has produced ..

Also, there was Gregor Mendel's work in genetics that played into this. All the discoveries after Darwin's publication have just continued to lead up to verifying the idea of common descent.

I also suggest that anyone interested in evolution head over to http://factsnotfantasy.com/links.php and check out more resources on evolution and its veracity as well as history. Even Wikipedia has a very good series of discussions on it.

(1) Darwin, C., "The Origin of Species by Means of Natural Selection, or the Preservation of Favoured Races in the Struggle For Life", London, John Murrary, (1859) p. 490

… to the best of my recollection Darwin was quite certain that all living things share a common ancestor.

Sure, Darwin played with the idea, and there’s his famous sketch, the tree of life … 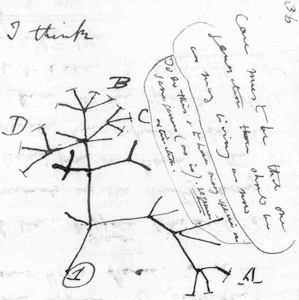 But Darwin was not certain (and even if he personally believed it, I need to stress that he was not certain) that there was only one common ancestor. All he was certain about is captured in these famous words:

There is a grandeur in this view of life, with its several powers, having been originally breathed into a few forms or into one.[1]

Notice the “into a few forms”. The idea that there might have been just one appears rather as an afterthought.

Now, in the meantime we know that there was only a single common ancestor due to the universality of the genetic code. But this evidence emerged long after Darwin’s death.

[1] Darwin, C., The Origin of Species by Means of Natural Selection, or the Preservation of Favoured Races in the Struggle For Life, London, John Murrary, 1859, p. 490

Not the answer you're looking for? Browse other questions tagged biology evolution charles-darwin .

34
Does DNA add credibility to the theory of evolution?
10
Do prions qualify as living and, if so, do they argue for a second origin of life?

6
Could the moons of Jupiter support life?
10
Could life begin by chance?
17
Of all humans ever born, did most men not become fathers?
53
Do studies show that viruses are contagious?