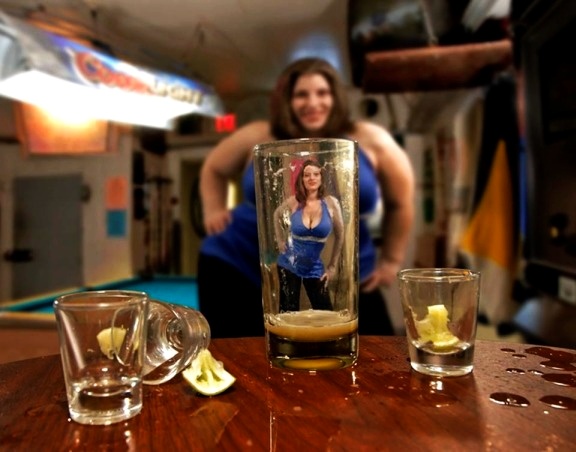 If you say that someone is wearing beer goggles, you mean that they have been drinking so much alcohol that they think someone is more sexually attractive than they really are.

The Mythbusters tested this in a Season 6 episode and deemed it "Plausible".

Researchers from the Universities of St Andrews and Glasgow seem to concur:

... men and women who have consumed a moderate amount of alcohol find the faces of members of the opposite sex 25% more attractive than their sober counterparts.

Professor Barry Jones said his study suggests that alcohol boosts the activity of the part of the human brain which is used to determine facial attractiveness, the nucleus accumbens.

What's more, the data suggest that men were less prone to losing their symmetry-detecting ability when intoxicated than women.

However, Vincent Egan from the University of Leicester, says different and debunks beer goggles in his study:

... found that alcohol actually has the opposite effect and made men see women as less attractive.

My question:
Can alcohol influence your brain in such a way that ugly ducklings transform into beauties?

Referring to Shakespeare shows the Beer Googles effect is not particularly new.... :)

It provokes the desire, but it takes away the performance. Therefore, much drink may be said to be an equivocator with lechery.

Seriously though, there have been numerous studies on the effects of alcohol, agreeing with Shakespeare's ribald Porter.

The review concludes (a) that alcohol disinhibits psychological sexual arousal and suppresses physiological responding, the former effect being stronger at lower doses of alcohol and the latter effect at higher doses; (b) that although suppression is strictly pharmacological in nature, disinhibition appears to be both pharmacological (the result of cognitive impairment) and psychological (the result of socially learned expectancies); and (c) that expectancies and cognitive impairment can disinhibit separately or jointly.

Alcohol, thus, appears to have both global and local effects upon the neural correlates of the MVPT-R (The Motor-Free Visual Perception Test-Revised) task, some of which are dose dependent.

So - let us observe someone who is intoxicated with alcohol. He has increased Psychological arousal, whilst his visual Perception is also affected. If you throw into this mix that alcohol also has detrimental effects on his reasoning, it seems less likely that an intoxicated man will notice imperfections in a potential partner, and will probably have lesser ability to discriminate too.

Not the answer you're looking for? Browse other questions tagged psychology biology alcohol .

56
Is LSD more harmful than alcohol?
21
Does drinking alcohol through a straw make you drunk quicker?
35
Does consuming different types of alcohol make you more sick than others?
8
Does our brain make ourselves look five times more beautiful than we really are?
6
Does the alcohol content of drinks make you fat?
2
Can alcohol trigger insomnia?
8
Does browsing Facebook make people more sad than browsing the Internet?