The Facebook group Americans for the Separation of Church and State posted this link: 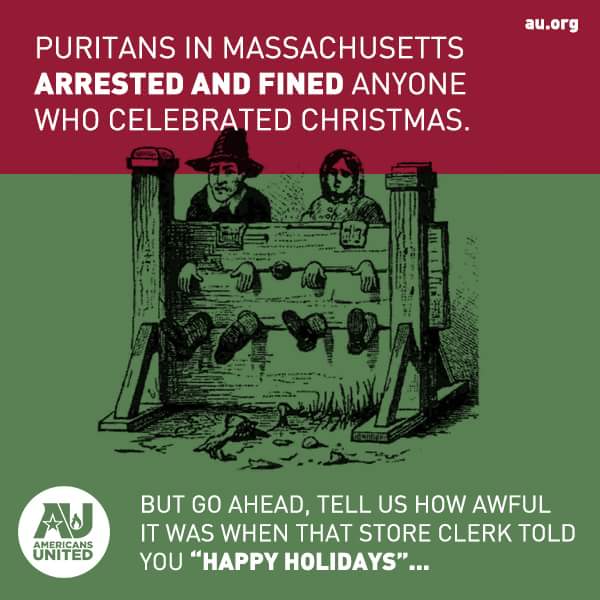 Puritans in Massachusetts arrested and fined anyone who celebrated Christmas. But go ahead, tell us how awful it was when that store clerk told you "Happy holidays"...

Is this claim historically accurate? Did the Puritans punish people for celebrating Christmas?

Active Oldest Votes
27
Want to improve this post? Add citations from reputable sources by editing the post. Posts with unsourced content may be edited or deleted.

Not only the Puritans, but many Protestant sects banned Christmas during this era. They had some logical reasons:

Some Puritans took a day off work on Christmas Day in 1621, claiming an offense to their "conscience." Plymouth governor William Bradford went to check on them after his own work was done, but was incensed to see that they were simply drinking, roughhousing, and playing stoolball instead. This was obviously a waste of precious manpower in a failing colony that needed it urgently, and he made them go back to work. As the 17th century progressed, the Puritans and European Protestants both did their best to stamp out any remnant of revelry from the day, and rarely acknowledged that it had any special circumstances surrounding it. (source: F.J. Bremer, John Winthrop: America's Forgotten Founding Father, Oxford, 2005, p. 226)

People were not put in the stocks for partying, as the image above suggests. Instead, they would hypothetically be fined five shillings (quite a bit) for either skipping work or gambling, under the following law of 1659 (citation for date below):

For preventing disorders arising in several places within this jurisdiction, by reason of some still observing such Festivals as were superstitiously kept in other countries, to the great dishonoring of God and offence to others: It is therefore ordered by the Court and the Authority that,

whosoever shall be found observing any such day as Christmas, or the like, either by forbearing labor, feasting, or any other way upon such account as aforesaid, every such person so offending shall pay for each offense five shillings as a fine to the country.

And whereas not only at such times, but at several other times, also it is a custom too frequent in many places to expend time in unlawful games as cards, dice, &c, &c, It is therefore further ordered and by this Court declared,

That after publication hereof, whosoever shall be found in this jurisdiction playing either at Cards or at Dice contrary to this order shall pay as a fine to the County the sum of five shillings for every such offence.

There's no record that the law was enforced, and it was repealed in 1681 (source). So, as for the central claim of this question, I have to say it's unclear whether the Puritans ever did punish people under secular law for celebrating Christmas. The most we can say is that a group of revelers was sent back to work in 1621 (ibid.) However, it's likely that the Puritans were hoping to exacerbate social pressure on villagers in some way or another, but that moralizing in the churches turned out to be a more effective and less risky tool than secular law. As the text of the law implies, the definition of "celebration" was extremely vague at the time and strayed into the realm of gambling and other illegal games.

Why was skipping work on Christmas associated with gambling? The December festivals in that era really were a bit chaotic. What people thought of as "Yuletide" apparently involved whoring and gambling, and going door-to-door harassing people for money and drinks, a practice that has come down to us as "wassailing". The Mystery Science Theater 3000 portrayal of wassailing was apparently accurate! (source)

Christmas was a threat to public health, as even its defenders admitted. Reverend Henry Bourne, who wanted to make Christmas a holy day, acknowledged that it was common "for Men to rise early in the Morning, that they may follow strong Drink, and continue untill Night, till Wine inflame them" all the way from mid-December well into February. The harvest was over and there was apparently little else to do for some folks. These days we have video games at least. (ibid.)

The social taboo on Christmas lasted a long time in Massachusetts particularly; apparently it was a regular workday and schoolday up until the late 19th century, and no special church services were held at all. According to Harriet Beecher Stowe, it was the arrival of more ritually liberal churches, notably the Episcopalians, that finally made Christmas celebrations Christian and moral to the eyes of New England villagers, although it seems to have taken many decades for it to achieve full legitimacy. Christmas was also explicitly promoted by pamphleteers in America's early days as an ecumenical holiday that citizens of any faith could participate in without guilt, thus giving a divided country a reason to show love of neighbor in the lonely winter season. (ibid.)

With that intention in mind, happy holidays!

Not the answer you're looking for? Browse other questions tagged history law christmas .

188
Did people think the Earth was flat?
28
Do Christmas celebrations have these diverse non-Christian origins?
12
Did Columbus order atrocities against the Lucayan people?
2
Did people use to urinate everywhere at fancy balls?
18
Which of these deities were believed to be born on Christmas?
24
Did a department store in Tokyo crucify Santa Claus?
7
Was text messaging originally developed for deaf people?
50
Did Hillary Clinton propose to punish flag burners in 2005?