Do more than 1/3 of Kansas residents own guns?

The image below, circulating on Facebook and clearly edited, claims that

Kansas has just under 3 million residents in total, which would mean that more than 1/3 of Kansas residents own guns.

I've spent most of my adult life in Kansas, and while many of my friends do own guns (some multiple guns), I don't think 1/3 of my friends are gun-owners. But naturally, my friends do not make for a representative sample of the population as a whole, so I'm asking here. 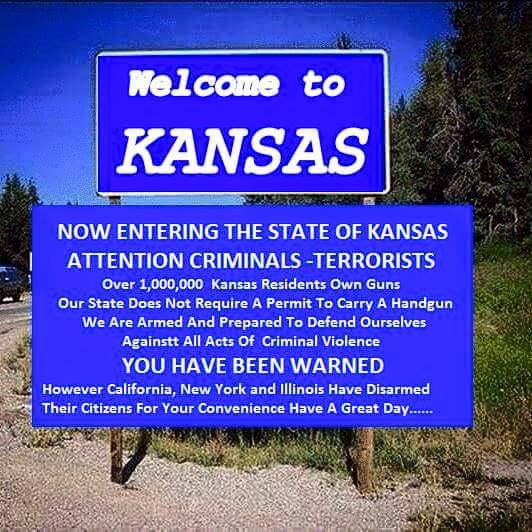 Within the bounds of statistical uncertainty:

Yes about one third of residents of Kansas own guns.

And it's far from being the state with the highest gun ownership. There are plenty of surveys of gun ownership in the US, and figures for Kansas are generally in the low thirties. Some older surveys place it over 40%. Six states have gun ownership rates over 50%. If your friends are a representative sample of US residents overall, then yes, 1/3 of them own guns.

Technically the surveys are of adults owning guns, so if children own fewer then the figure may be less than a million. But if you consider 'people living in a household where a gun is owned' I would expect that to bring it back over the million.

Here are some references:

21
Are more people accidentally killed by doctors than accidentally killed by guns and traffic combined?
17
Are there more guns in America than people?
17
Are guns in the USA used 80 times more often to protect life than to take it?
22
Were firearms prohibited in Dodge City, Kansas in the 1870s?
9
Are there 141 US Counties that have more registered voters than residents?
88
Did toddlers with guns claim more American lives than terrorism in 2015?
8
Did the USA used to have more guns per person than it does now?
10
Do more than 22% of American adults own Bitcoin?