Can we smell coming rain?

I read in a book that apparently a 'sea salt' or sailor could smell the rain and then predict oncoming weather. Is this true, can people smell rain?

Before the rain begins, one of the first odors you may notice as winds pick up and clouds roll in is a sweet, pungent zing in your nostrils. That's the sharp, fresh aroma of ozone—a form of oxygen whose name comes from the Greek word ozein (to smell). Tropospheric chemist Louisa Emmons at the National Center for Atmospheric Research explains that ozone emanates from fertilizers and pollutants as well as natural sources. An electrical charge—from lightning or a man-made source such as an electrical generator—splits atmospheric nitrogen and oxygen molecules into separate atoms. Some of these recombine into nitric oxide, and this in turn reacts with other atmospheric chemicals, occasionally producing a molecule made up of three oxygen atoms—ozone, or O3. (Most atmospheric oxygen is made up of two atoms—O2.) The scent of ozone heralds stormy weather because a thunderstorm's downdrafts carry O3 from higher altitudes to nose level.

Of course you at that point you won't be "predicting" the rain on the smell alone. A that point most likely you'll see other indications that the storm is coming: big dark cumulonimbus, gusty winds, drop in pressure.

Note in picture below (storm supercell) warm updraft passes through the storm cell and comes down well in front of it. Also the cold downdraft precedes the rain. 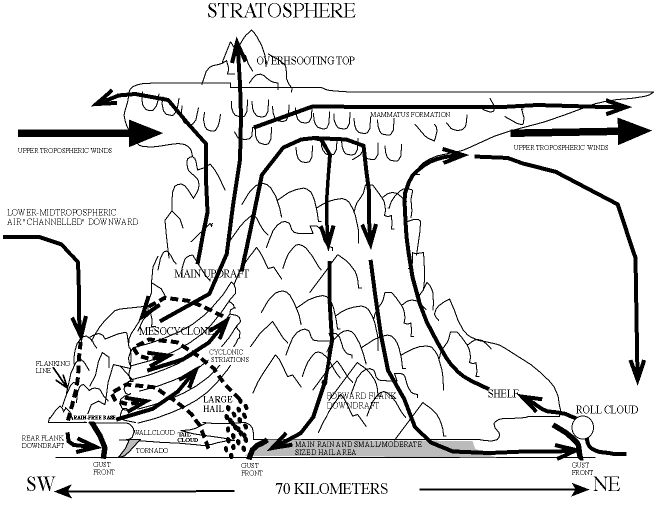 Source of the graphic: Meteorology 302 course, Department of Geosciences, SFSU

Not the answer you're looking for? Browse other questions tagged weather .

42
Is ball lightning real?
2
Does "red rain" contain extraterrestrial cells?
4
Is assuming that tomorrow's weather will be the same as today a good model?
4
Does this video show a very localised rain shower falling on one spot?
1
Can helicopters safely fly when it is raining?
10
Can Dubai make it rain with drones that emit electric charges?