Molecules of the protein myosin drag a ball of endorphins along an active filament into the inner part of the brain's parietal cortex, which produces feelings of happiness.

However, I have some doubts.

For example, on imgur there are people that claim it isn't so:

That's kinesin transporting a vesicle along a microtubule. I hope OP's not one of my students ...

And the video looks uncannily similar, but not identical, to this Harvard BioVisions "Inner life of the cell" video (about halfway through) where it represents inner cell activity unrelated to endorphin or the brain. 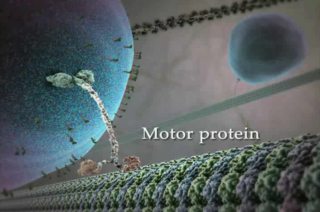 Was this video meant to represent a ball of endorphins being transported into the brain cortex or is it a different biology video which has been misrepresented?

No, this is not an image of "myosin dragging a ball of endorphins". As you suspected, it is showing kinesin walking up a microtubule.

The reason the animated GIF looks uncannily similar to the Inner Life of The Cell video is because it was created by the same artist of the same subject material.

The company behind the animation, Art of the Cell has a blog article by the artist John Liebler, where he describes some of the history and inspiration for the animation.

As my workload allows, I plan on spending some time revisiting many of the subjects from The Inner Life of the Cell, and where better to start than with a new version of this guy.

The kinesin motor protein was a real scene stealer in Inner Life, although it wasn’t even in the original treatment for the short. The original plan was to omit the motor protein in the vesicle shots, but when I saw Graham Johnson’s animation of the way a kinesin takes a step from April 2000(below), I secretly went ahead and modeled one of my own, animated a walk cycle for it, and added it into the vesicle shot. After I showed it to Dr. Viel, it not only got into the animation, it got several more shots as well.

Check out the stills and animations to understand the context of which version is which.

The accepted answer already says that the video is meant to show kinesin transporting a vesicle along a microtubule, but I think it's worth adding that it doesn't show that accurately either.

The progress of kinesin on a microtubule can be measured experimentally, and looks like this:

The motion happens in 8nm steps, but the rate of the steps is erratic, and there is a lot of randomness in the movement of the "feet" (which are actually called heads).

Harvard/XVIVO made a 2014 sequel to the 2006 video which shows the motion more accurately (starting at 1:19; my link starts there).

The keep-on-truckin' walk cycle of the 2006 video seems to have been a creation of John Liebler, the animator (see the accepted answer). He said that it was based on this 2000 animation by Graham Johnson, but Johnson's animation seems to more closely match the 2014 video (in which Liebler wasn't involved) than the 2006 video.

Myosin transports vesicles only through short distances, while the vesicles transported by kinesin do a longer journey.

Kinesin and dynein (I think that was the name in English) are two different proteins that transport vesicles along microtubules. What we can see in the picture is a microtubule - it consists of 13 "filaments" attached to each other, leaving a tubular gap inside. That being so, the protein has to be kinesin (the one which transports vesicles further from the cure of the cell) or dynein (the one which transports them towards the core). I don't know much about dynein, but I know that kinesin looks like the protein pictured here: two monomers with two heads and two tails.

It's not myosin, because then we wouldn't be seeing a microtubule but an actin filament, which consists of only two filaments, not 13. We wouldn't be able to see so many tiny balls forming thw filament.

Also, I think the motor-type myosin has one monomer only: just one head and one tail. But I'm not sure about this, since I know dimerical forms of myosin exist, too. I guess it's easy to mistake them.

That vesicle could contain endorphins, why not. They could be on their way to get out of the secretory cell, prepared to make us happy. Still wonderful.

"After processing in the Endoplasmic Reticulum (ER), a sequence of amino acids on the propeptide directs the molecule to the Golgi apparatus, where it is further processed by peptidases, packaged into a vesicle along with a pool of peptidases, and released for transport down the axon. The vesicle is actively transported down the axon along microtubules, seen in yellow, getting passed from one kinesin protein to the next."*

10
Is this guitar player capable of playing as fast as depicted?
7
Is this video of a boxing kangaroo match authentic?
2
Is this a video from the Tsar bomb?
6
Is this video of someone dodging cars authentic?
0
Is the hand in this video of feeding hummingbirds an actual human hand?
3
Is this accident footage authentic?
3
What was this 2021 "Nessie" sighting showing?