A Facebook friend linked to a claim that I find rather dubious. On the website of the Physicians Committee for Responsible Medicine, they talk about health concerns about dairy products and have an infographic that makes some rather bold claims: 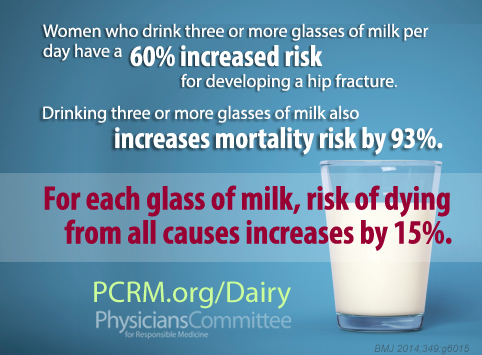 I'm more interested in the latter, but are either of these claims accurate?

TL:DR This claim is based on a single scientific paper, and the conclusion in the infographic is exaggerated.

The paper cited in the more detailed post on Physicians Committee for Responsible Medicine is BMJ 2014,349:g6015 "Milk intake and risk of mortality and fractures in women and men: cohort studies", published in the theBMJ (formerly British Medical Journal). theBMJ is a respected peer-reviewed scientific publication.

In the experiment described in the paper, a very large number of Swedish men and women were asked questions about their milk intake (and other dietary habits), and then followed up 11-20 years later. 93% more of the women taking three or more glasses of milk a day had died, compared with the group that were taking less than one glass per day.

So the headline figure is in fact true.

However the authors of the paper specifically note the limitations of their studies, and caution against interpretations of the kind in the infographic.

High milk intake was associated with higher mortality in one cohort of women and in another cohort of men, and with higher fracture incidence in women. Given the observational study designs with the inherent possibility of residual confounding and reverse causation phenomena, a cautious interpretation of the results is recommended.

Specific issues the paper notes include:

It should be noted that the Physicians Committee for Responsible Medicine is largely defined by its advocacy of a Vegetarian/Vegan lifestyle.

9
Drinking 3 glasses of milk per day doubles a woman's chances of death?