Did the Russian SU-24 enter into Turkish airspace? [closed]

According to the BBC, Turkey and Russia have disputed the flight path and this map shows the disputed paths: 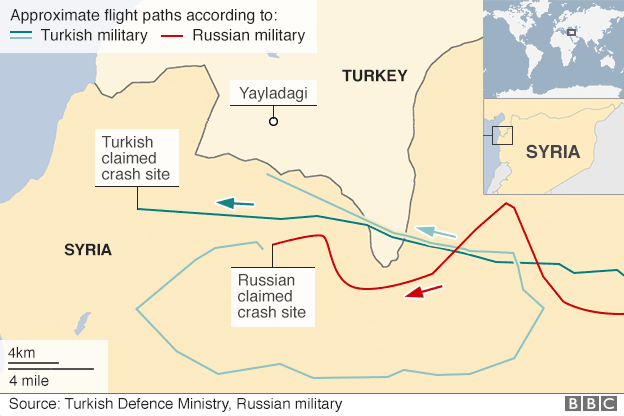 According to the Guardian, that means the plane would have only been in Turkish territory for 17 seconds at the most.

For your first question,

Did Turkey actually warn the Russians? And if so, how was it that Turkey warned Russia for a full five minute if the plane was in Turkish airspace for only 17 seconds, at most?

Turkey explained this in its statement to the UN Security Council

This morning (24 November) 2 SU-24 planes, the nationality of which are unknown have approached Turkish national airspace. The Planes in question have been warned 10 times during a period of 5 minutes via ‘Emergency’ channel and asked to change their headings south immediately

I take this to mean that the warning started when the aircraft approaches the Turkish airspace. I think this makes sense - when you sees a hostile aircraft approaching your territory, you don't necessarily want to wait for them to actually enter your territory before warning them. Turkey backed up their claim by releasing an audio of the warning. Some news reports played this audio, for example towards the end of this video. The US State Department also said that its own sources corroborated this account (independently of the Turkish claim).

The available information including evidence from Turkey and our own sources indicates the Russian aircraft violated Turkish airspace. We also know that the Turks warned the Russian pilots multiple times before the airspace violation to which the Turks received no response.

Russia, on the other hand denied that they were warned. Of course, it's more difficult to "prove" that something didn't happen, so unless there is a clear, verifiable evidence that they got the warnings, their claim can't be rejected either.

For your second question

Did the plane actually enter into Turkish airspace? What proof is there for the plane's path?

Both Russia and Turkey have provided maps of what they claim the flight path was. Naturally the Turkish one showed that the plane went inside their airspace, while the Russian one did not. The US seems to side with Turkey too on this one (see quote above). The ways they produced the maps are not exactly open to inspection, so I don't know if we can decisively say whether the Turkish or the Russian version of events were true.

So, there you go. Both countries have contradicting claims about what happened, so at least one of them must be mistaken, but there is nothing clearly disprovable in either claim.

Not the answer you're looking for? Browse other questions tagged war russia turkey .

10
Did the “Russian Sleep Experiment” happen?
50
Did a Russian Orthodox priest sprinkle holy water on Russia's Central Bank's servers?
4
Does the average Russian drink 250mL of vodka a day?
15
Did Turkish football fans shout “Allahu akbar” during a pre-match moment of silence for the Paris attacks?
1
Did a Russian Judge meet with Supreme Court Justice Souter?
18
Were the “DNC leak” emails stolen by the Russian government?
5
Are Russian Twitter trolls exploiting the (Feb 2018) Florida school shooting?
5
Are dollar bills seen by the Turkish government as a secret sign of connections to Gülen?
48
Did the US push the Kurds to lower their defences against Turkey in the months preceding the latest Turkish military operation against them?