According to this article and this one, the theory about black holes is all false.

A while ago, Indian astrophysicist Abhas Mitra studied and discovered that black holes are not what they were thought to be. It doesn’t succumb anything that’s around it. Rather, black holes are ultra hot fire balls, similar to Sun. Abhas Mitra said that the gas streams which are being pulled inward by gravity, get extremely hot by friction and may radiate X-rays. Eminent physicist Stephen Hawking also agreed upon the fact that Black holes do not actually exist.

Are the above articles reliable? Does Stephen Hawking actually disagree on the existence of black holes?

No, that isn't exactly what Stephen Hawking said.

What Hawking did was propose an explanation to one of the most puzzling problems in theoretical physics. How can black holes exist when they seem to break two fundamental laws of physics?1:

Last week, famed physicist Stephen Hawking made headlines with this bold statement: “there are no black holes.”

Those words come directly from Hawking’s latest paper, but they are contained within a larger point involving the mechanics of a black hole and its famous “event horizon.” (That’s the area thought to exist around a black hole from which nothing, not even light, can escape.) To be clear, Hawking was not claiming that black holes don’t exist. Astronomers have been observing black holes for decades, said Joseph Polchinski, theoretical physicist at the Kavli Institute for Theoretical Physics at the University of California, Santa Barbara.

Related: Abhas Mitra states that Hawking reached the same conclusion as a paper Mitra published in 2000.4:

Recent observation by NASA scientists of giant flares of X-rays from a black hole confirms his theory that the so-called black holes are not "true" black holes but actually ultra hot balls of fire like our Sun.2 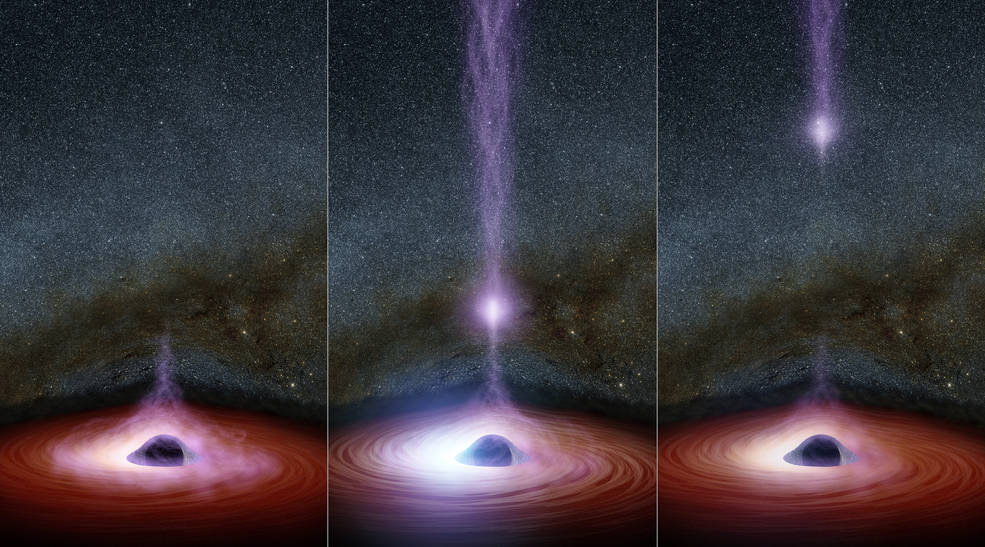 This diagram shows how a shifting feature, called a corona, can create a flare of X-rays around a black hole. The corona (feature represented in purplish colors) gathers inward (left), becoming brighter, before shooting away from the black hole (middle and right). Astronomers don't know why the coronas shift, but they have learned that this process leads to a brightening of X-ray light that can be observed by telescopes.

No, Hawking didn't deny the existence of black holes. Hawking said that, in light of new understanding, the previous definition of black holes wasn't strictly accurate and proposed a better definition to describe the same entities. He wasn't denying that the entities known as black holes existed. (1) :

The absence of event horizons mean that there are no black holes - in the sense of regimes from which light can’t escape to infinity. There are however apparent horizons which persist for a period of time. This suggests that black holes should be redefined as metastable bound states of the gravitational field. It will also mean that the CFT on the boundary of anti deSitter space will be dual to the whole anti deSitter space, and not merely the region outside the horizon.

22
Did Bill Nye get booed by a room full of Texans for saying that the moon reflected the suns light?
9
Does a prototype car that runs on water exist?
30
Did Albert Einstein say "the only reason for time is so that everything doesn't happen at once"?
12
Did Israel install cameras that can see through clothing on the Temple Mount?
10
Did the Indian Mathematician Aryabhata state that the earth was round and calculate diameter of earth