Is this image of eye colour inheritance accurate?

This image is circulating on social media (e.g. Pinterest). 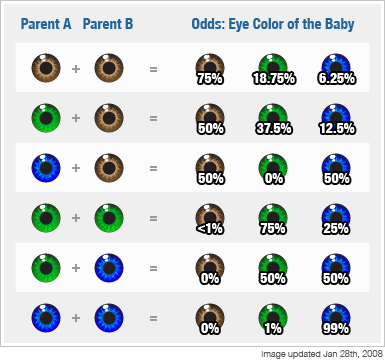 It implies that if you have green eyes, then you can't possibly have one biological parent with blue eyes and the other with brown.

The image also says if you have brown eyes, your parents can't both have blue eyes.

Are these restrictions true?

According to the US National Institutes of Health (NIH) (emphasis added):

Researchers used to think that eye color was determined by a single gene and followed a simple inheritance pattern in which brown eyes were dominant to blue eyes. Under this model, it was believed that parents who both had blue eyes could not have a child with brown eyes. However, later studies showed that this model was too simplistic. Although it is uncommon, parents with blue eyes can have children with brown eyes. The inheritance of eye color is more complex than originally suspected because multiple genes are involved. While a child’s eye color can often be predicted by the eye colors of his or her parents and other relatives, genetic variations sometimes produce unexpected results.

In the question, you correctly noted that "The image also says if you have brown eyes, your parents can't both have blue eyes." This is contrary to the NIH's statement.

Thus, the figure is invalidated.

Are these restrictions true?

No, the second restriction is not true. The figure is inaccurate and at least one mistake exists.

So naturally genealogy is a very complex field, very active research, and things are being refuted all the time. The problems seem to become more complex the more we know about it, so it might still be some time before you can "choose" the eye color of your offspring. A quick google search reveals on Wikipedia

"So far, as many as 15 genes have been associated with eye color inheritance. Some of the eye-color genes include OCA2 and HERC2.[9]"

Essentially the answer is that likelihood of inheritance of eye-color will need to take into account more factors. A nice little tool can be found here: which is NOT more accurate.

The real question is what accuracy will satisfy you to be correct? Ballpark figures: pretty much accurate. As accurately as we can predict: probably not

30
Is this image about child teeth development accurate?
38
Do colour-blind people see through certain kinds of camouflage?
35
Can you cause mosquitos to explode from drinking too much blood by flexing your muscles?
14
Is 70% of your immune system “located” in your gut?
7
Is this Indian Man, Mûrasi, 179 years old?
12
Does “power posing” affect testosterone and cortisol levels?
18
Is this comparison of wedge tailed eagles and bald eagles accurate?
37
Is this what “happiness looks like”?
12
Has the synthetic bacteria Synthia become a rogue flesh-eating disease?