Wikipedia claims the following. Ignaty Karpezo was a general during WWII. After a heavy bombing he was found without signs of life. A medic determined death. He was buried consequently.

But after a while the unit was visited by the superior ranks. They heard that a general was killed. They said that Soviet generals do not die and ordered to open the grave. Surprisingly Kaprezo was found alive and lived till 1987.

I wonder how and whether it is true. 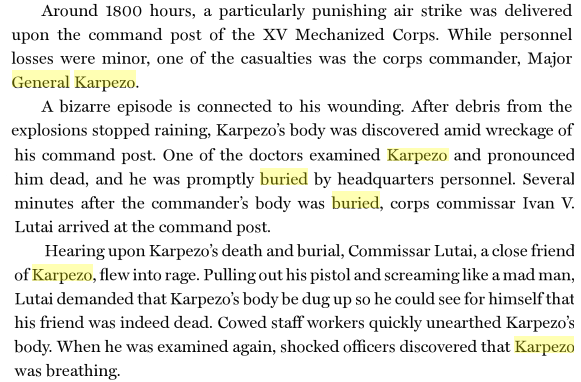 11
Was Stalin planning to attack Germany?
12
Was it legal to hang any Welshman found in Chester after sunset?
21
Did Robin Hood exist and get buried here?
21
Was Oppenheimer a spy passing nuclear secrets to Soviet agents?
11
Was Greenpeace ever sponsored by KGB?
7
Were the Soviet Union and Nazi Germany de facto allies in September 1939?
7
Was there ever a speech by USSR officials before 1950 where it was asked of Soviet women to uphold traditional female roles?
9
Did Dr. Nikolay Chudinov revive Permian bacteria found in a potassium salt crystal in Perm, 1972?
7
Was a 37,000-year-old elephant-skin drum found in the Antarctic?