Did BBC change an article title about Israelis shooting dead a Palestinian in a hospital?

In 12 November 2015, Israeli agents disguised as Arabs escorting a woman in labor, raided a hospital in Hebron, West Bank, seized a Palestinian suspected of stabbing and shot dead his cousin. The dead cousin was apparently unarmed but tried to obstruct the arrest.

This website (presumably pro-Palestinian) claimed that BBC 'softened' the title of the article covering this event, from 'Israelis shoot dead Palestinian in Hebron hospital raid' to 'Israelis in disguise raid Hebron hospital, seizing suspect'. The new title hides the fact that someone was shot dead (the content still mention this fact though). 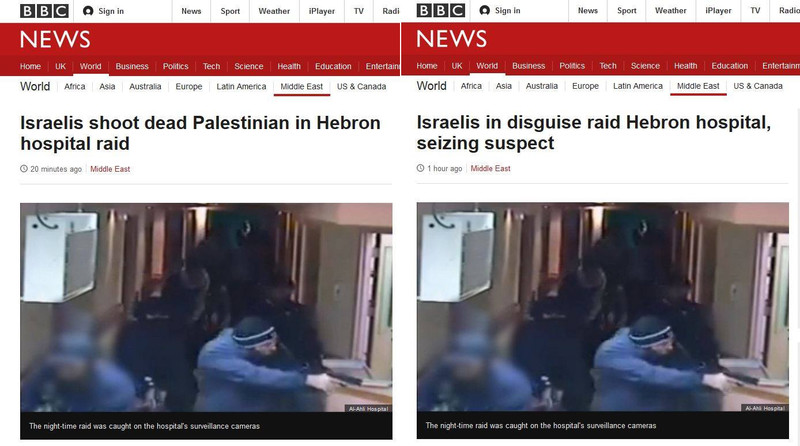 with links to the article in question.

Disclaimer: This is NOT an official BBC ME account. But it is based on their RSS feed.

The tweet doesn't exactly match the original, but would be consistent with the suspicion of stealth editing - an internet slang term describing a change being made to the article without any record of the change being preserved. (The original blog post notes that it's common for the BBC to change content without recording that a change has been made - it isn't specific to this particular case)

In that paragraph, it cites News Sniffer, an automated website for detecting stealth editing from specific news organisations.

28
Did Ben Gurion say this about conquering Palestinian land?