Since last year I often see an image in both Twitter and Facebook claiming that Senator McCain once meet ISIS leader al-Baghdadi. The image is used as propaganda regarding the belief of some people that the US is behind the empowering of the terrorist group ISIS. It is true that Senator McCain ever meet ISIS leader al-Baghdadi? 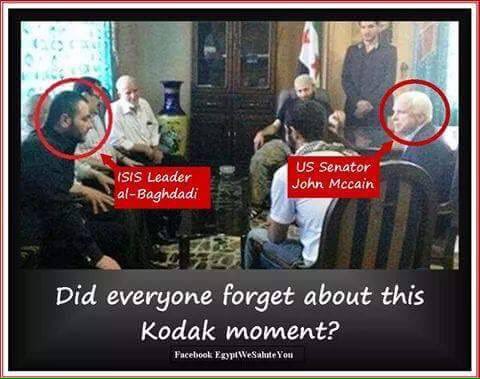 This is completely untrue.

The rumors are based partly on images of a Syrian fighter who resembles Mr. Baghdadi, seen in photographs with Mr. McCain — some originally posted on Twitter by the senator — during his visit in May 2013 to northern Syria. He met members of the Free Syrian Army, an insurgent group that opposes ISIS and that President Obama, in a speech [in September 2014] on his new strategy for battling ISIS, has vowed to strengthen.

On May 27, 2013, McCain slipped across the Turkish border to spend a few hours in Syria with members of the Free Syrian Army. Mouaz Moustafa, executive director of the Syrian Emergency Task Force, who helped arrange the visit and was with McCain, said many soldiers were members or commanders of the Northern Storm brigade, which serves under the army’s Supreme Military Council. One man was Gen. Salim Idriss, who at the time was chief of staff of the Supreme Military Council. “These guys, the Northern Storm brigade, are bitter enemies of ISIS,” Moustafa said, in part because they were so effective. As a result of the photos of the fighters with McCain, ISIS declared that “everyone in this picture needs their head chopped off,” he said. “After the meeting, many of the Northern Storm were completely killed by ISIS.”

Not the answer you're looking for? Browse other questions tagged terrorism isis .

28
Did Snowden reveal that ISIS is a USA-Israel tactic?
19
Did Hillary Clinton admit in her memoirs to creating ISIS?
5
Were Spaniards threatened with terrorist attacks by an ISIS leader if they didn't vote Unidos Podemos?
1
Does ISIS claim that every Muslim who doesn't give bayah to Baghdadi is an apostate/infidel?
8
Did 16% of French citizens support ISIS in 2014?