Did 800 children in Hong Kong protest against dolphin hunting in Taiji?

800 children in Hong Kong protest against Dolphin slaughter in Taiji 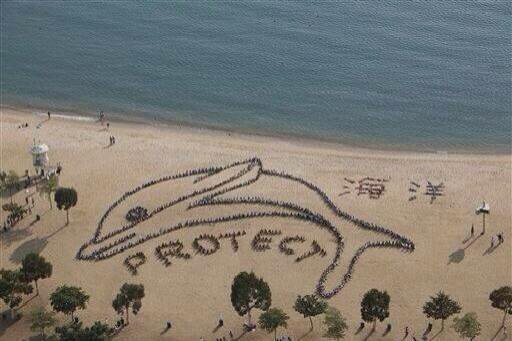 Did 800 children in Hong Kong protest against dolphin hunting in Taiji?

No. The assembly is about a ban on trawling in Hong Kong.

About 800 school children and teachers form the shape of a Chinese white dolphin, along with the word "Protect" and Chinese characters "Ocean" to complement the government's ban of trawling in Hong Kong from 2013. Photo: Reuters

Free markets have their place, but not when it comes to fishing. That is why the ban on bottom and mid-water trawling in our waters took effect at the start of the new year and is so welcome. Limited restrictions and a ravenous appetite for seafood have led to the fishing industry harvesting a greater catch than is sustainable. Fish stocks are in crisis, the marine environment dangerously stressed and fleet restructuring urgently needed.

The ban is a first, but giant, step in that direction. It puts 50 square kilometres of our waters off-limits to trawlers, banishing their nets that can indiscriminately scoop up all marine life from bed to surface. With our island and reef-studded waters a breeding and nursery ground for a rich variety of fish, the lack of regulation has been particularly destructive. After 14 years of discussion, moves that will allow for recovery of populations and habitats are finally in place.

Trawling ban may not be enough mentions that Hong Kong is a dolphin habitat:

The ban is a courageous measure to bring the city’s marine ecosystem back from the brink of collapse. Aside from being an important habitat for the Chinese white dolphin, Hong Kong is also home to a surprising range of living reef communities, with 10 out of its 84 hard coral species first discovered in local waters.

The WWF suggests this ban is beneficial to the dolphins. From Facts About the Trawling Ban in Hong Kong Waters

The trawling ban is the giant first step to save our near-collapsed marine ecosystem, restore the devastated fish stock and start driving towards sustainable fisheries management. The ban also plays a major role in ensuring the continued survival of the Chinese white dolphins, which are threatened by diminished food supply as a result of overfishing.

Not the answer you're looking for? Browse other questions tagged japan dolphins .

10
Did Jews claim to be asians to Imperial Japan?
11
Is this tweet about classes one month after the Hiroshima bombing, and the 2011 tsunami accurate?
5
Did a lack of Muslims in Japan help prevent a 2002 AQ terrorist attack?