Did this Twitter bot predict the Paris shootings 2 days before they happened?

A (now suspended) Twitter bot under the handle PZFeed Ebooks (@PZbooks) posted this tweet on November 11th, at 11:44 AM. Note the date carefully, that's November 11th, 2015. 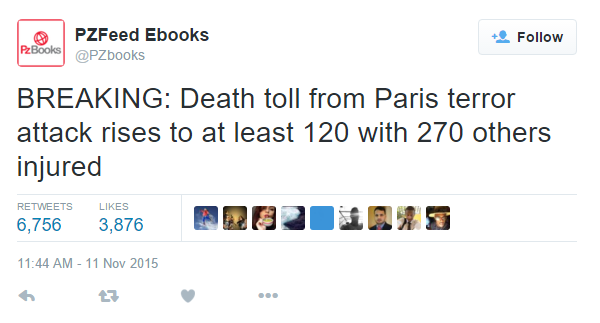 BREAKING: Death toll from Paris terror attack rises to at least 120 with 270 others injured

And yet, there are some news articles posted just today saying the exact same thing, with at least 120 dead, such as this article, this article, and many others.

If you click on the link to the tweet it's clear no part of the page has been modified, and the tweet itself has been replied to and retweeted countless times.

What could explain how it predicted the death toll from the Paris terror attacks a full 2 days before the shooting went down?

The name PZFeed Ebooks is suggestive that

AFP: Death toll from Nigerian mosque attack rises to at least 120 with 270 others injured http://tinyurl.com/og6lodu 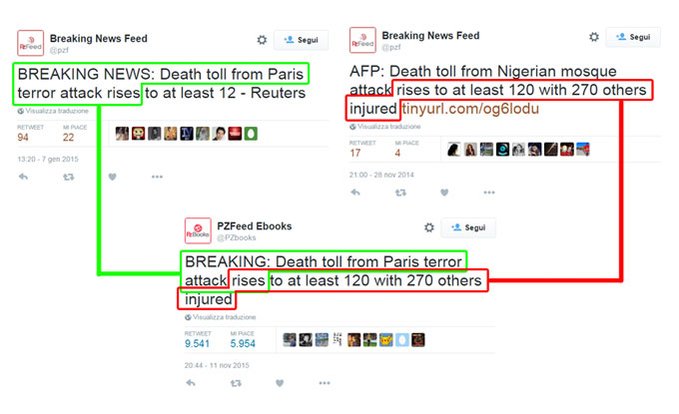 The bot's software knew that an incident like "Nigerian mosque attack" could be replaced with another incident like "Paris terror attack", which the PZFeed account had used to describe the Charlie Hebdo murders. That's all.

The remainder of your question is whether this constitutes a "prediction". Human beings are pattern seekers and it's very easy to see some sort of mystery to this single tweet, but really, millions of silly things are posted to Twitter every day, and a robot-generated comedy account would seem to be about as far from willful prediction as it gets.

Another "psychic Tweet" which comes to my mind is the young man who apparently saw Benedict resigning and Pope Francis getting elected in his sleep. This tweet is exciting because out of all of the predictions constantly posted to Twitter, it came true. But there is no way to measure how true a Twitter prediction is going to be until it actually happens. Popperian science can only maintain a cool skepticism about predictions with no reliable methodology behind them.

Not the answer you're looking for? Browse other questions tagged terrorism social-media divination .

6
What role did Facebook/Twitter play in the "Arab Spring"?
6
Did the Qur'an predict the defeat of the Persians at the Battle of Issus?
9
Did the Zohar predict 9/11?
196
Did the Twitter account Fifndhs predict the exact World Cup results ahead of time?
16
Did Turkish football fans shout "Allahu akbar" during a pre-match moment of silence for the Paris attacks?