Is this comparison of wedge tailed eagles and bald eagles accurate? 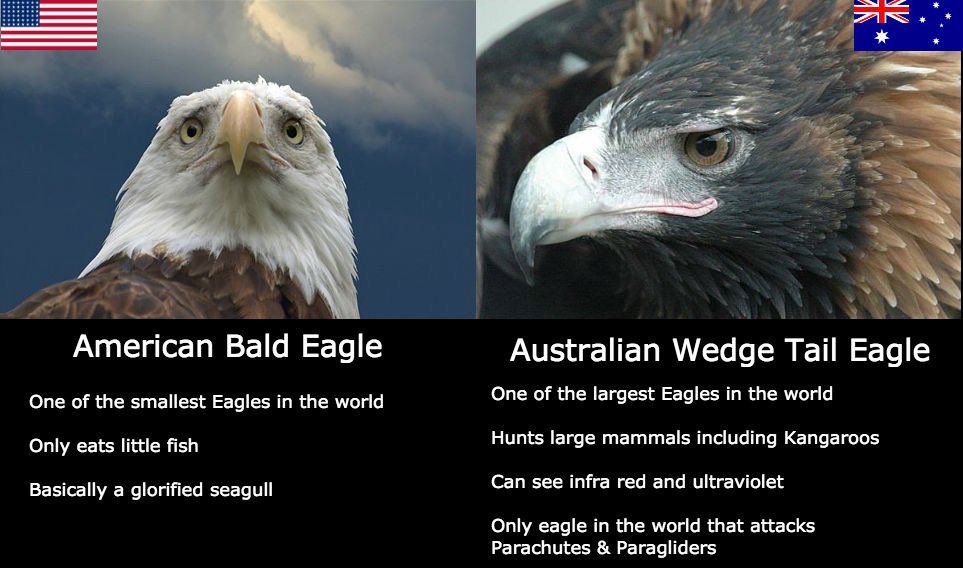 Claim #1: One of the smallest Eagles in the world.

Second in size only to California condors (Gymnogyps californianus) and about the same size as golden eagles (Aquila chrysaetos), bald eagles dwarf most other North American raptors.

Partly False
American bald eagles are known to prefer fish but they also scavenge carrion or steal the kills of other animals.

They also take birds, especially waterfowl, and occasional mammals. In addition to eating other animals such as ducks, muskrats, and sometimes turtles, they eat carrion willingly, and are notorious for robbing osprey of their catches.

They are also reported to feed on human flesh and consume Harbor Seal placenta.

Claim #1: One of the largest Eagles in the world.

True
The Wedge-Tailed Eagle is known to be the largest raptor in Australia and fourth largest among the 10 largest eagles of the world based on the data in 'Raptors of the World' by Ferguson-Lees, J and Christie, D in 2001. The largest wingspan ever verified for an eagle was for this species when a female killed in Tasmania in 1931 was found to have a wingspan of 284 cm (9 ft 4 in) and another female measured barely smaller at 279 cm (9 ft 2 in).

This eagle's great length and wingspan place it among the largest eagles in the world but its wings, at more than 65 cm (26 in), and tail, at 45 cm (18 in), are both unusually elongated for its body weight and 8-9 other eagle species regularly outweigh it.

In comparison, the wingspan of Steller's sea eagle (Haliaeetus pelagicus) is one of the largest of any living eagle in the world, at an median of 2.13 m (7 ft 0 in) and its weight is 5 to 9 kg (11 to 20 lb) which makes Aquila audax smaller in overall size (including body mass).

True
The Australian wedge tailed eagle is known to cooperatively hunt mammals such as adult kangaroos and kangaroo joeys which are baby kangaroos, birds such as emu and reptiles such as bobtail skinks.

You would expect such a huge, powerful bird to be a ferocious hunter. In fact, the Wedge-tailed Eagle is not nearly as swift or as deadly as other birds of prey such as falcons and sparrow hawks. Often it will swoop down onto a fleeing rabbit or wallaby, only to come up empty- handed (or empty-clawed!).

Wedge-tailed Eagles eat a wide variety of mammals, lizards and birds, depending on their local abundance. Mammals make up the greatest share of their diet, and rabbits are the most important live prey taken. They will also eat possums, gliders, cats, dogs, piglets, kangaroos, wallabies, lambs, goats, calves and foxes.

Simon Cherriman who has done extensive research on Wedgies has a lot of pictures of Australian Wedge Tail Eagle prey here.

True
Many bird species including other eagle groups and pigeons can see UV light.

False
The majority of animals and birds are not sensitive to near-infrared spectrum (720nm-1500nm) based on this answer. Infrared detection in vertebrates is known in snakes and vampire bats.

Claim #4: Only eagle in the world that attacks Parachutes and Paragliders

Partly true but debatable
The known documented event was an attack of pair of wedge tailed eagles on a paraglider named Nicky Moss.

However, other eagle species such as the Himalayan golden eagles are also known to attack paragliders which is documented here and here.

The Australian museum describes the wedge-tailed eagle as "one of the largest eagles in the world".

The Australian Popular Science article states that wedge-tailed eagles attack hang gliders and paragliders, and has a video which is an apparent first-hand experience of this.

Wikipedia's article on wedge-tailed eagles states that they can see into infrared and UV, but doesn't provide a source.

Birds in Backyards mentions that a group of wedge-tailed eagles can hunt a kangaroo. The comparison quoted in the question didn't mention that the hunting of kangaroos was done by groups.

Wedge-tailed Eagles may hunt singly, in pairs or in larger groups. Working together, a group of eagles can attack and kill animals as large as adult kangaroos.

Wedgies will take on a variety of things that fly into their territory and it's becoming a problem for farmers and land surveyors who use drones. Many a drone has been lost to the talons of our eagles and there are countless videos of paragliders, drones and sometimes people being attacked. They're unmatched in the air and will often engage in talon on talon fights with other eagles.

Personally I wouldn't want to get within a kilometre of a pissed off Wedgie but that's just me.

Also they are of Least Concern on the endangered scale, though their Tasmanian cousins are Highly endangered and a bit of a concern currently. Wedge tails will cooperate with others to bring down larger prey and steal prey from other birds and dingoes as well as eating directly off the road and snacking on highway roadkill. Most Truckers will spot a Wedgie on the road and slow down as to not hit them because they can be rather slow to take off and usually crash through the windscreen and take the driver out with them. Which isn't as funny as it sounds when you think about a 40 - 50 kilo bird with a wingspan of 2.3 metres plowing through your windshield at 100km an hour.

All in all the Wedge Tailed Eagle is a perfect embodiment of the aussie spirit of not-giving-a-flying-fuck and an excellent bird.

Personally I like both birds. They evolved to do what they do and behave how they do because of their habitats and lifestyles. If they both had the same habitat I'm sure they would have evolved differently.

Well, first of all, a wedge-tailed eagle can be more than half the size of a small car, whereas a bald eagle is about 3/4 times the size of a wedge-tail. Secondly, the wedge-tail is one of eleven species of proper eagles (in the genus Aquila) whereas the bald eagle is a sea eagle, which is part of the genus Haliaeetus. So not only is it smaller, but it's also not even a true eagle. Bald eagles eat "waterfowl and small mammals like squirrels, prairie dogs, raccoons and rabbits" (according to the American National Eagle Centre), whereas wedge-tailed eagles can (and do) take down a fully-grown red kangaroo, the size of which is comparable with a 6-foot human, and which can weigh up to 90 kilograms (approximately 200lb). They are also more than willing to attack humans, and pretty much anything else that moves if they're hungry enough. In addition, wedge-tailed eagles have survived on one of the most inhospitable continents on the planet(slide 12) (beaten by Antarctica only in terms of weather, since Australia's fauna is particularly deadly), whereas bald eagles live mainly in either coastal or forested areas where there is ample food.

Not the answer you're looking for? Browse other questions tagged united-states biology australia .

33
Is this image about child teeth development accurate?
23
List comparing countries attacked by Iran and the USA accurate?
8
Does this video depict an accurate example of a Common Core math problem?
17
Is this image of eye colour inheritance accurate?
77
Is this pie graph describing US government spending accurate?
24
Is this chart of executive branch criminal prosecutions accurate?