Did two people in jetpacks fly with an A380?

This video has been doing the rounds of the internet - An Airbus A380 flying in formation with 2 jetpack - and news sites have raised an uproar of critics calling "fake". 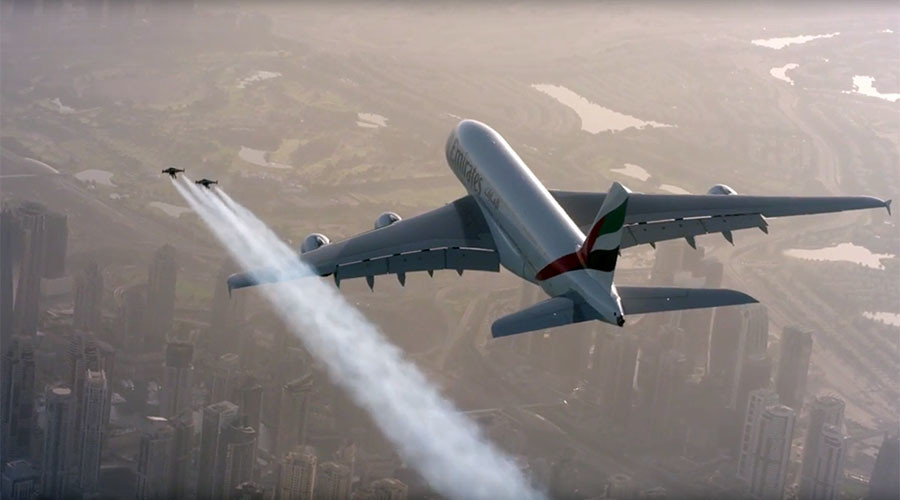 Did these jetpacks fly with an A380?

Yes, this is definitely real, and not just real, an amazing show of skill and aviation.

On 13th October 2015, two pilots/stuntmen/skydivers (Yves Rossy and Vince Reffet) of stunt team Jetman Dubai performed this stunt with the help of Emirates Airline, and one of their A380's.

The Emirates A380 and Jetman Dubai team recently took to the skies of Dubai for an extraordinary formation flight which showcases just how far aviation has come. The formations were conducted over the Palm Jumeirah and Dubai skyline with Burj Khalifa in the background [...] While the formation flight looked effortless on film, painstaking planning and meticulous collaboration with an intense focus on safety drove all efforts. [...] The carefully choreographed aerial showcase involved the world’s largest passenger aircraft flying at 4,000 feet in two holding patterns. The A380 aircraft was then joined by the Jetman Dubai duo, experienced pilots and operators of the smallest jet propelled wing, who were deployed from a helicopter that hovered above the aircraft at 5,500 feet. The duo conducted formations on both sides of the aircraft and joined to one side thereafter before breaking away.

Judging by the behinds the scenes video made on the day it took 4 aircraft, and countless people to organise this stunt and ensure its safety.

As I kind of expected, this is being questioned at aviation.se too where you will no doubt find some more technical details of the practicalities of this flight.

Not the answer you're looking for? Browse other questions tagged aviation video .

7
Did Kobe Bryant jump over a car?
33
Were the Wright Brothers the first to fly?
12
Is it possible to fly like a bird using semi-motorized wings?
57
Did an F-15 airplane successfully land with just one wing?
30
Can a commercial airplane fly in an inverted position as depicted in Flight?
22
Did Jean-Claude Van Damme do a suspended split between two trucks?
16
Did the BBC fake scenes in Planet Earth 2 with composite shots and CGI?
39
Are 700 more planes a day expected to fly because of the Heathrow expansion?
1
Can helicopters safely fly when it is raining?