Do cats always land on their feet?

Assuming a fall from a survivable height, will a cat always land on its feet?

Has this been studied? Is there real data to back it up?

A cat dropped upside-down turns over very rapidly - in fact, it will do so within its own standing height.

Étienne-Jules Marey experimented on cats by shooting them (Video). With his chronophotographic gun.

The minimum height is a basic physics problem...

...use Newton's law of motion, which says that mass times acceleration is equal to the sum of all the forces acting on the object. Since the cat is falling only a short distance at a fairly low velocity, it is safe to assume that the only force acting on the cat is gravity. Thus,

where m is the mass of the cat, a is the acceleration of the cat, and -mg is the force of gravity (assuming up is positive), where g is a constant (g = 979 cm/sec2 at a latitude like San Diego when you add centripetal acceleration to the standard value given for g, which is 980.7 cm/sec2 ).

See: Differential Equations and Integration for all the fun math.

The maximum height and velocity are related. Once weightless the cat has no "down" and might not maintain proper orientation.

When a cat, blindfolded and lying on its back, is dropped, it immediately turns into normal position to land on its feet, indicating that a visual cue is not involved in this spatial orientation. Function of such orientation response of cats was examined during microgravity produced by aircraft parabolic flights. The three-week-old kittens whose postural righting reflex was not developed, floated upside-down in air during weightlessness, whereas in the eight- and twelve-week-old ones whose reflexes were well established, the reflex acted for the initial several seconds but ceased thereafter during the weightless state, with or without blindfold;
Disorientation of animals in microgravity.

What appears to happen is that in falls from above 7 stories, cats have time to reach terminal velocity, the speed at which their drag due to wind resistance equals their weight due to gravity and they stop accelerating. At this speed, the cat relaxes its limbs and is better able to survive the impact (at a slight cost – they get less broken limbs, but more chest injuries).
source

Finally we have this excellent interesting questionable data from the Annals of Improbable Research...

Cats have excellent balance, and are remarkably acrobatic. When turned upside down and dropped from a height, a cat generally has the ability to land on its feet. Until now, no one has systematically investigated the limits of this phenomenon. In this study, I dropped a cat upside down from various heights, and observed whether the cat landed on its feet. 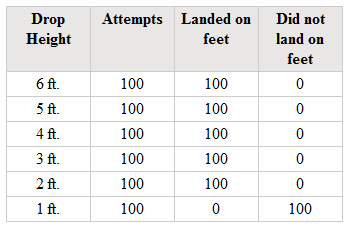 Does a cat land on its feet when dropped from a height of less than one foot? This preliminary study indicates that the answer may be no. However, further experiments, preferably with the same cat, are needed to settle the question.

Does a Cat Always Land on Its Feet ? Fiorella Gambale, Ph.D.

NOTE: A cat with a piece of buttered toast attached to its back, butter side up, will not land on its feet. In fact the forces create by this configuration will cause the cat to hover.

Not the answer you're looking for? Browse other questions tagged biology physics zoology .

8
Do cats always come back home from anywhere?
55
Can cats survive a fall from any height?
21
Do cats and dogs have saliva that has antibacterial or antiseptic properties?
5
Are all white cats with blue eyes deaf?
6
Can domestic cats be healthy as vegetarians?