Is yellow the most conspicuous color?

It is often claimed that yellow (or a particular hue of yellow or yellow-green) is the most conspicuous color. This supposed fact is used in many industries from safety to advertising. This reasoning is used as justification for the yellow coloration of everything from safety vests to school buses to hard hats. 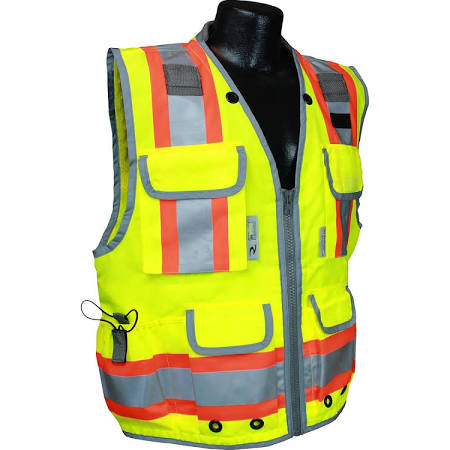 You can see this claim made here:

Recent research in commercial and safety fields has converged on the same conclusion: the most conspicuous colors are yellow and yellow-green, sometimes called "lime yellow."

Lateral peripheral vision for detecting yellows is 1.24 times greater than for red.

Many experts also point out that colors such as yellow or greenish-yellow are more visible to the human eye under dimmer conditions compared to red.

While both sites mention "science", "experts", or "studies", there are no direct references or links provided. The first site has references, but they are to secondary works and not the studies themselves--with the exception of a 1931 study for which that site is the only reference in Google search results.

Conversely, I have seen some claims that other colors such as red, orange, or pink are more conspicuous than yellow.

One argument is that during the daytime yellow is more likely to blend into background colors.

So be careful to take into account not only colors' "raw" visibility but also the ability to discern them from background.

I recalled hearing that the U.S. Coast Guard had studied this, in an effort to determine the best colors for life rafts, to make them more likely to be seen by the spotters aboard SAR aircraft. I could not find that study, but I did find a similar, older one by the U.S. Navy.

I did not feel like reading the whole thing, so I skipped to the conclusion on page 57:

This paper does mention a color called "Saturn Yellow" elsewhere as having superior detection. It also indicates brightness (florescence) may be more important than hue, as the observers were often unable to correctly report the color of an object from a great distance.

The conclusion seems to favor orange, and the fact that PFDs (life jackets) and life rafts today are often orange is also compelling.

EDIT: As a counter point, I have discovered that the International Tennis Federation had done its own study in the 1970s, with emphasis on television viewers. I couldn't confirm it, but it appears they did not release the full study publicly, only the conclusion. They were even asked "Why not pink or orange?" and only said the study indicated yellow was best.

My original intent was that the answer to the stated question is "no." But when we put the Navy and ITF data together with the ideas discussed in the comments, perhaps the best answer one can give is just "Maybe, it depends."

20
Do elderly drivers cause the most accidents?
10
Does the color red make you hungrier?
9
Is there a relationship between yellow and moods?
8
Are dioxins the most toxic chemicals known to science?
16
Do longer yellow lights increase traffic hazards?
1
Can one's favorite color accurately predict one's personality?
108
Could people perceive the color blue in ancient times?
8
Are 1 in 12 men color blind?
153
Was pink a boy color and blue a girl color prior to the 20th century?