Are Malays in Malaysia descended from Yunnan, China?

The research discovered that the Malays in these sub-ethnic groups were genetically composed of some Proto-Malay (orang asli Melayu), Semang and Indian DNA, with at least 20 per cent Malay and and 52 per cent Chinese DNA.

"This finding corresponds with a theory that these Malays originated from Austronesia in Yunnan, China," Professor Zilfalil said, " with the first wave of migration from Austronesia to Southeast Asia occurring in 25, 000 BC and the second one in 1, 500 BC".

The professor added that "the Malay language used in the Malay Peninsula, Sabah and Sarawak also belongs to the Austronesian stock".

My question is, is there any other evidence that Malays in Malaysia and Indonesia are actually descendants from Yunnan, China?

Note: this question was asked at history SE, but was deemed off topic. So I guess Skeptic SE would probably be a better fit.

Malays are an ethnic group that established itself in the Malay Peninsula and slowly spread to parts of Borneo and Sumatra. They are essentially a hybrid of 3 main groups of people that arrived from mainland South East Asia and to a lesser extent people from South India and South East China who arrived much later by way of the Philippine Islands and Borneo. The frequent use of the terms Proto-Malays and Deutero-Malays by Malaysian researchers is Malay-centric and does in no way help in the understanding of the origin of the Malay people and hence, should be dropped.

According to the latest genetic tests, the primary components of the Malay genetic make-up are Austroasiatic -38%, Austronesian -35% and South Indian - 20% (Malaysian Negrito, Papuan, Chinese, Arab and Portuguese make up the rest). Below is the DNA Map of Asian people: 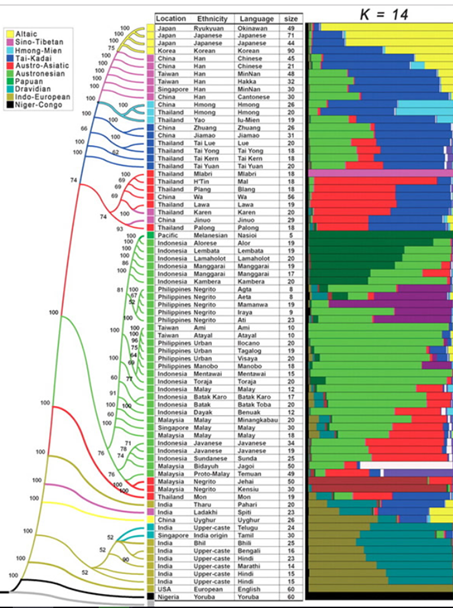 The Theory of Malay origin (the Austronesian portion) being Yunnan of South West China is not well supported by evidence and is not widely accepted by researchers. To be credible, there has to be evidence from archeological findings, language, culture and genetics. So far, the only basis for this theory is some similarities in ancient tools which on its own is insuffient.

Malaysia's USM Professor Zilfalil was quoted as saying ""This finding corresponds with a theory that these Malays originated from Austronesia in Yunnan, China, with the first wave of migration from Austronesia to Southeast Asia occurring in 25, 000 BC and the second one in 1, 500 BC". I am rather perplexed by the said professor's comments which I take issue with and they are:

Unlike the "Yunnan origin theory", the "out-of-Taiwan theory" for Austronesian migration is highly supported by archeological findings, genetic studies, language, culturel and agriculture.

What is more likely is that some of the ancestors of the Khmers from what is now known as South Vietnam, may have migrated upwards towards Yunnan in South West China and intermarried with Austronesians who moved down to Yunnan from the Yang Tze river due to wars with the Han Chinese who came from north of the Yang Tze river. Meanwhile, some of the ancestors of the Khmers migrated South-wards to the Malay Peninsula bringing with them tools that were similar to those that migrated to Yunnan, hence resulting in the erroneous conclusion that Malays originated from Yunnan.

Not the answer you're looking for? Browse other questions tagged malaysia .

1
Are Dr. Zakir Naik's speeches banned in the UK, Canada, and Malaysia?