Did Marilyn Manson kill a chicken on stage?

An interesting conversation occurred in the office today, I'll summarise: Marilyn Manson sacrificed a chicken during a concert. 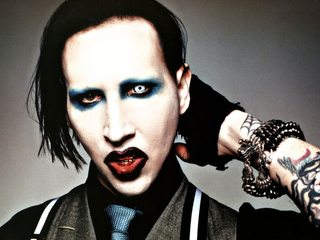 Marilyn Manson is known for being... unusual. So, after a quick Google, it seems like there are mixed reports.

For the sake of clarity, I'll break done the question:

Quoting from the Marilyn Manson site,

January 13, 1994- The Chicken Incident, Dallas Texas. Manson knocked a caged chicken around the stage, and tossed it into the mosh pit. Although rumors claim that the chicken was killed, it actually escaped relatively unharmed.

This story is also repeated in a different version in Letters to the Met by Karen Davis in an American Online interview transcript in 1995 with Marilyn Manson.

"From what information we have pieced together on this incident, the Ft. Lauderdale-based band Marilyn Manson, which uses plenty of shock props in its live act, brought a chicken to its Friday, January 13 [1995] concert at Trees. ...Apparently, about halfway through the show, Mr. Manson (that's what you're supposed to call him), went to a cage where the chicken was being kept, opened it, and said something to the effect of, "Be free."

"What happened next differs depending on whom you talk to, but we're pretty sure we know which version is true. A chef at a local restaurant saw the chicken and told a friend, "Catch that and I'll cook it." The friend obliged and chased the chicken through the mosh pit which had formed in front of the stage. He caught the chicken and was then approached by another member of the audience, who pleaded for the chicken's life and actually started pulling it away. We figure that in the confusion of chasing the chicken through the mosh pit, and the tug of war that cost the chicken some feathers, many concertgoers, specifically those who were not in the pit, may have thought the chicken was being torn apart. In fact, the chef's friend lost the tug of war, and the chicken was taken away. Whether the band got it back or not, we're not certain. But we know, at least, that a rabid crowd did not slaughter the chicken with their bare hands.

"The chicken, which was requested on the band's rider (as a joke), was given to the band by the promoter of the Houston show prior to the Dallas date. She was not seriously harmed during the Dallas incident and is living on a farm outside of Dallas under the pseudonym "Foghorn".

Not the answer you're looking for? Browse other questions tagged musicians .

13
Did Rick Astley receive only $12 in royalties for "Never Gonna Give You Up' from YouTube?
8
Did Mozart improvise?