I find that seemingly equivalent workouts on my treadmill and my elliptical trainer results in the latter device reporting that I have burned almost twice the calories as the former. However as I tend to feel a lot more tired after running on the treadmill than the elliptical, I'm a little sceptical of the "calories burned" reading.

A recent study named the elliptical trainer the least accurate when it comes to calorie counting, with most machines overestimating your burn by 42 percent [...]

There's lots of research into this, and it's not that simple.

In fact, there is even research into how people overestimate how simple it is!

Much of the research into the illiptical machine read-outs is aimed at improving the models, so they are more accurate, (or, as we see below, selecting the best models, so they are the ones you see in gyms) so we might predict that old machines would be less accurate than new ones.

In 2013, the US Navy looked into this for their training: *Accuracy of Calories Expended on 7 Commercially Available Exercise Machines: Validation for use a Cardio Alternatives for the Navy Physical Readiness Test

They found the accuracy depended on the amount of exercise: 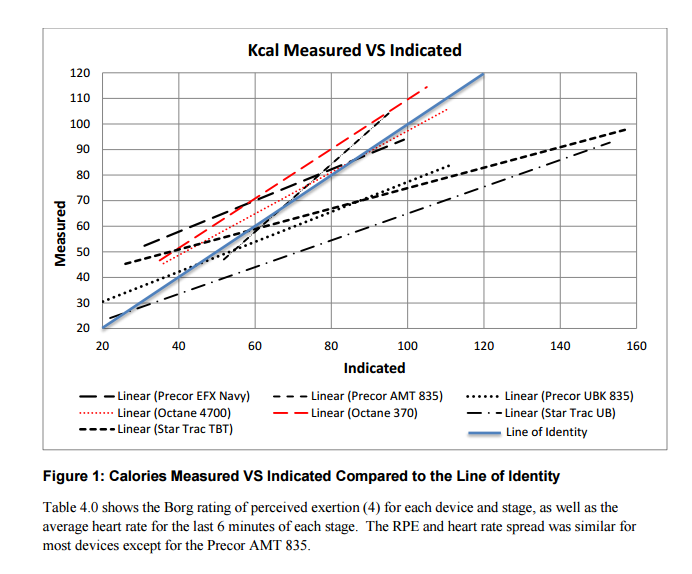 In a 2014 experiment, TESTING THE ACCURACY OF THE CALORIE TRACKER ON ELLIPTICALS, the experimenters only looked at one machine, and concluded "the calorie tracker on the Nautilus ellipticals are not an accurate form of calorie tracking for workouts." Reading between the lines, the elliptical trainer tended to overestimate, but this is not part of their conclusions, so should be treated with caution.

In a 2015 experiment, Do Elliptical Trainers Accurately Estimate Energy Expenditure?, undergraduates compared two machines, and found one was 2.7% underestimating and the other was 24.7% overestimating.

This 2015 paper, The relationship between body fat percentage and difference in caloric expenditure as measured by indirect calorimetry and estimated by an elliptical trainer is interesting further reading. It describes an experiment that failed to confirm some of the hypotheses, but its introduction covers a lot of interesting aspects the problem - that elliptical machines may be good for weight loss regimes, that their perceived exertion is lower than than might be expected. That the calorie readings are generally considered overestimates. That BMI levels may be important in getting accurate readings.

In this way, I haven't directly answered the question. However,