Does defecating while sitting cause more strain than squatting?

This commercial1 from "Squatty Potty" claims that evacuating stool in a seated position is suboptimal for humans because we have a muscle that partially pinches the colon when seated. They claim that, due to our evolution, the colon only becomes unobstructed by this muscle when in a crouched position.

1. It looks to me like they're really trying to sell a product and just using humor.

Process of Defecation: Research shows that the defecation is a complex, learned process which requires both an intact nervous system and normal muscle function. 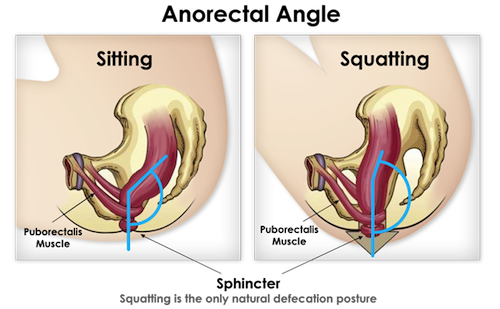 Attempting to voluntarily control defecation often results in straining per Pierre Paré, in 2011

The protective effects of squatting against constipation are not backed up by clinical data per Dr. Darren Brenner, a gastroenterology specialist. Further when inquired about Squatty Potty's claims by Eric Spitznagel,

"If you're a normal healthy person, I don't know if it's going to change anything in the short term or the long term," he said. "Maybe by changing your position, in 20 or 30 years down the line you'll reduce your likelihood of developing constipation. But there's no data to suggest that whatsoever."

Rebekah Kim a colorectal surgeon at the Center for Pelvic Floor Disorders at Virginia Hospital Center said in NPR that there are no clinical studies proving squatting reduces the amount of straining on the toilet.

"Squatting on a stool can reduce the amount of straining on the toilet, which may mean less hemorrhoids, but there are no clinical studies proving that," she says.

Conclusion: The results of the present study suggest that the greater the hip flexion achieved by squatting, the straighter the rectoanal canal will be, and accordingly, less strain will be required for defecation.

Squatting deserves considerably more attention before it is rejected as an option.

In conclusion, our study did not support an appreciable role for using sitting toilets as risk factors for CRC. Further larger prospective studies are needed to confirm this finding.

Limitations of squatting: Research shows a small rise in blood pressure in healthy and hypertensive patients adopting squatting posture and it has been been suggested that people with hypertension or higher risk of stroke should avoid it.

Search process for the research listed above

Referring to the advise from the chronic constipation patient leaflet of the World gastroenterology organization which has representation from 100 member societies with over 50,000 individual gastroenterologists worldwide, mimicing the natural position of squat may help bowel movements,

Sitting differently on the toilet may help your bowel movements. The natural position is a ‘squat’, which is not practical on most toilets. To mimic this position, try raising your feet with a footstool by around 25cm (10in), keep them flat and hip width apart, and lean forwards on your thighs and relax.

Not the answer you're looking for? Browse other questions tagged physiology toilets ergonomics .

35
Reading while lying down is more strenuous (unhealthy) for eyes
9
Are wall-mounted urinals more sanitary than floor mounted units?
18
Are women more sensitive to high-pitched noises than men?
30
Is using a standing desk for several hours healthier than sitting at a desk all day?
13
Does the Retina Display cause less eyestrain than other screens?
14
Does Emacs cause "Emacs pinky"?
21
Does working at a standing desk consume more calories than sitting?
11
Does standing as opposed to sitting or lying improve brain activity?
49
Does frequent sex cause vaginas to become permanently stretched?