A century ago, was giving birth a major cause of death?

When reading this article on BBC News I was surprised by the following claim:

Just compare now to what happened 100 years ago or so. Then, many women died in their 40s because of having to give birth many times. Lots of people died young.

This seems to imply that giving birth takes a toll on the body that is cumulative, eventually causing death in a significant number of women. This seems unlikely to me.

It is possible that the wording is poor, and it actually means that each birth carried a significant risk of death for the mother, and that multiplying this risk-per-birth by a large number of births per woman meant that many women died in childbirth. Even then, I find it unlikely that giving birth accounted for a significant proportion of female deaths; significant enough that it apparently is worth being the only mention in the article as to why people used to die younger.

Has maternal mortality due to child birth dropped in England over the past 100 years?

The 2006 paper, British maternal mortality in the 19th and early 20th centuries examines this.

Figure 1 illustrates the incredible improvement, just up to 1970 alone. 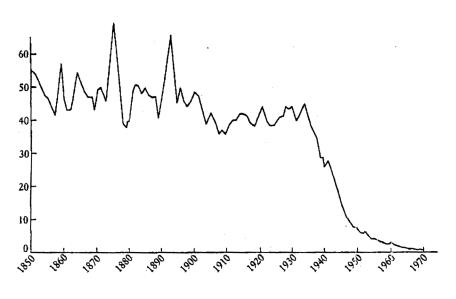 Does maternal mortality have a significant effect on life expectancy of women?

The 2008 paper Life Expectancy and Human Capital Investments: Evidence From Maternal Mortality Declines looked at Sri Lanka (admittedly not England), and the improvement in maternal mortality just between 1946 and 1953. They concluded it

That is a very impressive improvement. By aged 15, girls have already passed the dangerous first years of their lives. To improve their expected lifespan by an additional 4%, from only the reduced risk of dying during child-birth gained in seven years in the mid-1900s, is almost staggering.

Are women more likely to die during later pregnancies than earlier ones?

It's not quite that simple.

The first birth is the most dangerous, and then the next few are safer. As the woman has more children, the risk grows again.

I draw this conclusion from the review paper The Relationship Between Fertility and Maternal Mortality from the book Contraceptive Use and Controlled Fertility: Health Issues for Women and Children Background Papers.

All the population-based studies indicate and results from hospital studies generally confirm that the first birth and births of high order are strong risk factors for maternal mortality (Table 2). These studies indicate a J-or U-shaped risk with parity: high during the first pregnancy, lowest during the second or third, and high again by the fifth pregnancy. A similar pattern is found for gravidity, with an even stronger relative risk for first pregnancies relative to later-order pregnancies than is observed for first births.

Not the answer you're looking for? Browse other questions tagged history mortality birth .

14
Do antibiotics weaken your immune system?

10
Was Leonardo da Vinci a polyphasic sleeper?
13
Will 62 workers may lose their lives for each game played during Qatar’s 2022 World Cup?
20
Did Stalin kill more than 10 million People?
4
Does having a natural birth offer health benefits to the child vs. use of pain medication?
5
Does significant consumption of French fries double your chance of death?
83
Are female surgeons less likely to kill you?
9
Does Chinese astrology influence death rates?
50
As of August 2020, was the weekly mortality rate in the US the lowest in a decade and the second lowest in the 21st century so far?
9
Is India drastically undercounting covid deaths?