Was the genius behind Sherlock Holmes also behind one of the most infamous forgeries in history? 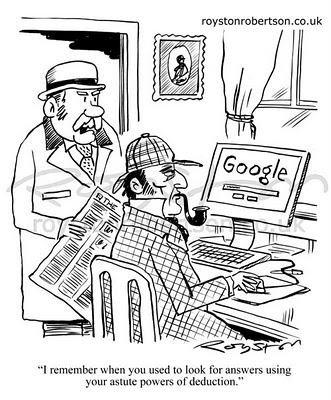 In what could be described in retrospect as basically a shallow grave near the village of Piltdown, Charles Dawson and Arthur Smith Woodward found the alleged remains of an early human fossil dubbed Eoanthropus Dawsoni. Curiously, bones of elephants, rhinos. hippos and mastadons were also found at the scene. In December 1912, they presented their finding to the Geological Society of London, and history was made.

Despite academic dissent, Piltdown Man was regarded as one of the oldest human fossils, as well as a possible missing link (reading list here for those not familiar). Although over time it was becoming increasingly clear Piltdown did not agree with the fossil record, and 1949 the fossils were dated by fluorine absorbtion and found to be quite recent.

J.S. Weiner and co. later revealed to the world that the Piltdown Man was a fake consisting of human skull fragments and the mandible of a juvenile, female orangutan. Skeptics, if there was ever a time to use the phrase "thoroughly debunked" this would be it. And even though it seems Weiner had some suspicions as to who had perpetrated the hoax (Dawson) when he published "The Piltdown Forgery" he does seem careful not to directly point the finger, and no definitive proof has been found.

In 1983, John Winslow and Alfred Meyer addressed the fact that no definite hoaxer had yet been identified despite the numerous suspects, and proposed..

But there was another interested figure who haunted the Piltdown site during excavation, a doctor who knew human anatomy and chemistry, someone interested in geology and archeology, and an avid collector of fossils. He was a man who loved hoaxes, adventure, and danger; a writer gifted at manipulating complex plots; and perhaps most important of all, one who bore a grudge against the British science establishment. He was none other than the creator of Sherlock Holmes, Sir Arthur Conan Doyle. source

The case against him seems to be circumstantial. Has any investigation into the matter yielded compelling evidence that Doyle was involved, if not directly responsible?

Or is this simply an attempt to involve/implicate a famous name based on little evidence?

My dad says I should try to answer some questions, so here goes:

First of all, which would make more sense. That an author would do this for no fame, or the discoverers did it to gain fame? That's what I thought about at first.

Talk Origins had an interesting site explaining the whole Piltdown Man history. Some relevant quotes about the forgery:

Sir Arthur Keith dies. Almost immediately a letter is published in which Keith had said he thought Dawson was behind the forgery (Anon 1955b; Hampton 1955).

There are long discussions about the hoaxers and why the did it:

Who did it? Who perpetrated the hoax? When the hoax was exposed nobody knew who the perpetrator was. No one confessed to the deed. For forty odd years people have speculated about the identity of the culprit; over time an impressive list of suspects has accumulated. The case against each suspect has been circumstantial, a constellation of suspicious behaviour, of possible motives, and of opportunity. In this section we present summaries of the arguments against the principal candidates.

A comprehensive listing of the accusations, when they were made, who made them, and who the accused were can be found in Tom Turrittin's Piltdown man overview; it includes details not given here including the particulars of 30 separate books or papers making accusations.

When the hoax was first exposed Dawson, Teilhard, and Woodward were the obvious suspects; they had made the major finds. In 1953 Weiner fingered Dawson as the culprit. Stephen Jay Gould argued that Teilhard and Dawson were the culprits. Woodward generally escaped suspicion; however Drawhorn made a strong case against him in 1994. Grafton Elliot Smith and Sir Arthur Keith were prominent scientists that played key roles in the discovery. Millar argued that Smith was the culprit; Spencer argued that it was a conspiracy between Dawson and Keith. Other candidates that have been mentioned over the years include Arthur Conan Doyle, the geologist W. J. Sollas, and the paleontologist Martin Hinton. This is by no means the end of the list; other people accused include Hargreaves, Abbot, Barlow, and Butterfield.

This fraud is quite unique. Most scientific frauds and hoaxes fall into a few categories. There are student japes, students conconcting evidence to fit a superior's theories. There are confirming evidence frauds, in which a researcher fabricates findings that they believe should be true. There are outright frauds for money, fossils that are fabricated for gullible collectors. There are rare cases of fabrication for reputation, done in the knowledge that the results will not be checked. And, upon occasion, there are frauds concocted simply as an expression of a perverse sense of humor.

The Piltdown hoax does not seem to fit any of these categories well. This was not an ordinary hoax; it was a systematic campaign over the years to establish the existence of Piltdown man. The early skull fragments were created in advance and salted with the foreknowledge that more extensive finds would be planted later. The hoaxer had to have good reason to believe that the salted fossils would be found.

One of the critical factors in any theory is to account for the fact that the perpetrator had to be confident that the salted fossils would be found. That suggests that either Dawson, Teilhard, or Woodward was involved since they alone made the initial finds. At first sight it would seem that Dawson must have been guilty since he made the initial find of the first two skull fragments. However he didn't! They were made by anonymous workmen. The "find" could have been arranged for a handful of coins. As Vere pointed out, the labourer Hargreaves, employed to do most of the digging, was also present at the site.

Another critical factor to be accounted for is access to the specimens that were used in the hoax. Likewise the question of skill and knowledge required for the hoax must be taken into account.

They even specifically talk about Sir Arthur Conan Doyle:

The argument for Doyle was made in an article in Science in 1983 by the anthropologist John Winslow. The Spring 1996 issue of Pacific Discovery has an excellent article by Robert Anderson on the Doyle theory. Doyle was a neighbour of Dawson, was an amateur bone hunter, and participated briefly in the digs. The principal arguments for Doyle as the culprit are circumstantial and literary; it has been argued that The Lost World describes the execution of the hoax in veiled terms. Anderson argues that the exact location of the planted fossils is spelled out in The Lost World as a puzzle. The essential weakness of the case against Doyle is that it would not have been possible for him to have planted the bones with any expectation that they would have been found. Walsh analyzes the case against Doyle in detail and finds it wanting.

The principal proponent of the Doyle theory, Richard Milner who is a historian of science from the American Museum of Natural History, still holds Doyle was responsible. In a debate staged by the Linnaean Society in March 1997 as part of National Science Week he argued the case for Arthur Conan Doyle and against the case for Hinton.

Sir Arthur was a zealous spiritualist, embittered by the exposure and prosecution of Henry Slade, one of his favourite psychics. It is suggested that Doyle sought to discredit the scientific establishment by faking evidence of something they wanted to believe in thereby showing scientists knew less than they thought they did.

So reading all that, I don't think he did do it.

Not the answer you're looking for? Browse other questions tagged history biology archeology .

12
The starchild skull
12
Did Conan Doyle write Sherlock Holmes?
14
Is the fossil KNM-ER 1470 evidence that other dating methods other than the fossil record are inaccurate?
29
Did Sir Arthur Conan Doyle call J.B. Rhine a "monumental ass" in print?
2
Is the skull fragment, said to be Hitler's, from a young woman?
10
Are results of carbon dating cross referenced by other methods?
82
Did Sir Arthur Conan Doyle prank 12 men into fleeing their countries?
18
Did the CIA feed false information to McCarthy to discredit his true claims that they were infiltrated by Soviet agents?